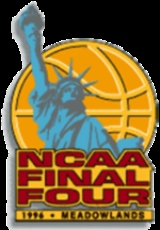 Encyclopedia
The 1996 NCAA Men's Division I Basketball Tournament involved 64 schools playing in single-elimination
Single-elimination tournament
A single-elimination tournament, also called a knockout, cup or sudden death tournament, is a type of elimination tournament where the loser of each match or bracket is immediately eliminated from winning the championship or first prize in the event...
play to determine the national champion of men's NCAA
National Collegiate Athletic Association
The National Collegiate Athletic Association is a semi-voluntary association of 1,281 institutions, conferences, organizations and individuals that organizes the athletic programs of many colleges and universities in the United States...
Division I college basketball
College basketball
College basketball most often refers to the USA basketball competitive governance structure established by the National Collegiate Athletic Association . Basketball in the NCAA is divided into three divisions: Division I, Division II and Division III....
. It began on March 14, 1996, and ended with the championship game on April 1 at Continental Airlines Arena in the Meadowlands Sports Complex
Meadowlands Sports Complex
The MetLife Sports Complex is a sports and entertainment facility located in East Rutherford, Bergen County, New Jersey, United States, owned and operated by the New Jersey Sports and Exposition Authority...
in East Rutherford, New Jersey
East Rutherford, New Jersey
East Rutherford is a borough in Bergen County, New Jersey. As of the 2010 United States Census, the borough population was 8,913. It is an inner-ring suburb of New York City, located west of Midtown Manhattan....
. A total of 63 games were played.

The Final Four venue was notable for two reasons:

Kentucky
Kentucky Wildcats men's basketball
The Kentucky Wildcats men's basketball team, representing the University of Kentucky, is the winningest in the history of college basketball, both in all-time wins and all-time winning percentage. Kentucky's all-time record currently stands at 2058–647...
, coached by Rick Pitino
Rick Pitino
Rick Pitino is an American basketball coach. Since 2001, he has been the head coach at the University of Louisville. He has also served as head coach at Boston University, Providence College and the University of Kentucky, leading that program to the NCAA championship in 1996...
, won the national title with a 76–67 victory in the final game over Syracuse
Syracuse Orange men's basketball
The Syracuse Orange men's basketball program is the intercollegiate men's basketball team representing Syracuse University. The program is classified in the NCAA's Division I, and the team competes in the Big East Conference...
, coached by Jim Boeheim
Jim Boeheim
James Arthur "Jim" Boeheim is the head coach of the men's basketball team at Syracuse University. Boeheim has guided the Orange to eight Big East regular season championships, five Big East Tournament championships, and 28 NCAA Tournament appearances, including three appearances in the national...
. Tony Delk
Tony Delk
Tony Lorenzo Delk is an American former professional basketball player and current assistant coach for the New Mexico State Aggies men's basketball team. He was team leader of the 1996 University of Kentucky Wildcats team that won the 1996 NCAA Men's Division I Basketball Tournament...
of Kentucky was named the tournament's Most Outstanding Player
NCAA Basketball Tournament Most Outstanding Player
At the conclusion of the NCAA men's and women's Division I basketball championships , the Associated Press selects a Most Outstanding Player. The MOP need not be, but almost always is a member of the Championship team, especially since the third place game was eliminated after 1981...
. Kentucky's run to the championship was one of the most dominant in NCAA tournament history, as the Wildcats won each of their first four games by at least 20 points and won every game by at least 7 points.

The committee that put together the bracket in 1996 was criticized for placing what clearly seemed to be the best two teams in college basketball - Massachusetts
UMass Minutemen basketball
The UMass Minutemen basketball team, also known as the Massachusetts Minutemen, represents the University of Massachusetts in Amherst, Massachusetts, in NCAA Division I men's competition...
and Kentucky - on the same side of the bracket so that they faced each other in the national semifinal - not the final game itself. Note that there are guidelines that the selection committee follows. In 2004 the procedure would be changed so that the regional sites would first be assigned their #1 seeds, then would be placed in the bracket so that the #1 overall seed would face the fourth #1 seed while the second #1 seed would face the third #1 seed, barring any upsets.

Connecticut, coached by Jim Calhoun
Jim Calhoun
James A. Calhoun is the head coach of the University of Connecticut's men's basketball team. His teams have won three national championships , played in four Final Fours , won the 1988 NIT championship, and have won seven Big East tournament championships...
and Massachusetts, coached by John Calipari
John Calipari
John Calipari is an American basketball coach. Since April 2009, he has been the men's head coach at the University of Kentucky....
, were later stripped of their wins, including the UMass Minuteman's Final Four appearance by the NCAA because a player had accepted illegal gifts from agents.