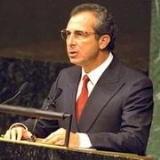 Encyclopedia
The 1994 Economic Crisis in Mexico, widely known as the Mexican peso crisis, was caused by the sudden devaluation
Devaluation
Devaluation is a reduction in the value of a currency with respect to those goods, services or other monetary units with which that currency can be exchanged....
of the Mexican peso
Mexican peso
The peso is the currency of Mexico. Modern peso and dollar currencies have a common origin in the 15th–19th century Spanish dollar, most continuing to use its sign, "$". The Mexican peso is the 12th most traded currency in the world, the third most traded in the Americas, and by far the most...
in December 1994.

The impact of the Mexican economic crisis on the Southern Cone
Southern Cone
Southern Cone is a geographic region composed of the southernmost areas of South America, south of the Tropic of Capricorn. Although geographically this includes part of Southern and Southeast of Brazil, in terms of political geography the Southern cone has traditionally comprised Argentina,...
and Brazil
Brazil
Brazil , officially the Federative Republic of Brazil , is the largest country in South America. It is the world's fifth largest country, both by geographical area and by population with over 192 million people...
was labeled the "Tequila Effect" .

The crisis is also known in Spanish as el error de diciembre — The December Mistake — a term coined by outgoing president Carlos Salinas de Gortari in reference to president Zedillo's sudden reversal of the former administration's policy of tight currency controls. While most analysts agree that devaluation was necessary for economic reasons, Salinas supporters argue that the process was mishandled on the political level.

The root causes of the crisis are usually attributed to Salinas de Gortari's policy decisions while in office, which ultimately strained the nation's finances. As in prior election cycles, a pre-election disposition to stimulate the economy, temporarily and unsustainably, led to post-election economic instability. There were concerns about the level and quality of credit extended by banks during the preceding low-interest rate period, as well as the standards for extending credit. The country's risk premium was affected by an armed rebellion in Chiapas
Chiapas
Chiapas officially Estado Libre y Soberano de Chiapas is one of the 31 states that, with the Federal District, comprise the 32 Federal Entities of Mexico. It is divided in 118 municipalities and its capital city is Tuxtla Gutierrez. Other important cites in Chiapas include San Cristóbal de las...
, causing investors to be wary of investing their money in an unstable region. The Mexican government's finances and cash availability were further hampered by two decades of increasing spending, a period of hyperinflation from 1985 to 1993, debt loads, and low oil prices. Its ability to absorb shocks was hampered by its commitments to finance past spending.

All of the above concerns, along with increasing current account deficit fostered by consumer binding and government spending, caused alarm among those who bought the tesobonos. The investors sold the tesobonos rapidly, depleting the already low central bank reserves. Given the fact that it was an election year, whose outcome might have changed as a result of a pre-election day economic downturn, Banco de México decided to buy Mexican Treasury Securities to maintain the monetary base, thus keeping the interest rates from rising. This caused an even bigger decline in the dollar reserves. However, nothing was done during the last five months of Salinas' administration. Some critics affirm this maintained Salinas' popularity, as he was seeking international support to become director general of the World Trade Organization
World Trade Organization
The World Trade Organization is an organization that intends to supervise and liberalize international trade. The organization officially commenced on January 1, 1995 under the Marrakech Agreement, replacing the General Agreement on Tariffs and Trade , which commenced in 1948...
. Zedillo took office on December 1, 1994.

A few days after a private meeting with major Mexican entrepreneurs, in which his administration asked them for their opinion of a planned devaluation; Zedillo announced his government would let the fixed rate band increase to 15 percent (up to 4 pesos per US dollar
United States dollar
The United States dollar , also referred to as the American dollar, is the official currency of the United States of America. It is divided into 100 smaller units called cents or pennies....
), by stopping the previous administration's measures to keep it at the previous fixed level. The government, being unable even to hold this line, decided to let it float.

The peso crashed under a floating regime from four pesos to the dollar to 7.2 to the dollar in the space of a week. The United States intervened rapidly, first by buying pesos in the open market, and then by granting assistance in the form of $50 billion in loan guarantees. The dollar stabilized at the rate of 6 pesos per dollar. By 1996, the economy was growing (peaked at 7% growth in 1999). In 1997, Mexico repaid, ahead of schedule, all US Treasury loans.

A week of intense currency crisis
Currency crisis
A currency crisis, which is also called a balance-of-payments crisis, is a sudden devaluation of a currency caused by chronic balance-of-payments deficits which usually ends in a speculative attack in the foreign exchange market. It occurs when the value of a currency changes quickly, undermining...
stabilized some time after the US
United States
The United States of America is a federal constitutional republic comprising fifty states and a federal district...
President Clinton
Bill Clinton
William Jefferson "Bill" Clinton is an American politician who served as the 42nd President of the United States from 1993 to 2001. Inaugurated at age 46, he was the third-youngest president. He took office at the end of the Cold War, and was the first president of the baby boomer generation...
, in concert with international organizations, granted a loan to the Mexican government.

Loans and guarantees to Mexico totaled almost $50 billion, with the following contributions:


The Mexican "bailout" attracted criticism in the US Congress and the press for the central role of the former Co-Chairman of Goldman Sachs, U.S. Treasury Secretary Robert Rubin
Robert Rubin
Robert Edward Rubin served as the 70th United States Secretary of the Treasury during both the first and second Clinton administrations. Before his government service, he spent 26 years at Goldman Sachs eventually serving as a member of the Board, and Co-Chairman from 1990-1992...
. Rubin used a Treasury Department account under his personal control to distribute $20 billion to bail out Mexican bonds, of which Goldman was a key distributor. In late 1995, Patrick Buchanan wrote "[n]ewly installed President Ernesto Zedillo said he needed the cash to pay off bonds held by Citibank and Goldman Sachs, lest the New World Order come crashing down around the ears of its panicked acolytes." According to Hannibal Travis, the "former manager of $5 billion in Mexican investments at Goldman Sachs became U.S.
Secretary of the Treasury and lobbied for legislation that forced U.S. taxpayers to contribute in excess of $20 billion to bail out investors in Mexican securities, in a form of 'corporate socialism'".

The United States' assistance was provided via the treasury
United States Department of the Treasury
The Department of the Treasury is an executive department and the treasury of the United States federal government. It was established by an Act of Congress in 1789 to manage government revenue...
's Exchange Stabilization Fund
Exchange Stabilization Fund
The Exchange Stabilization Fund is an emergency reserve fund of the United States Treasury Department, normally used for foreign exchange intervention...
. This was slightly controversial, as President Bill Clinton
Bill Clinton
William Jefferson "Bill" Clinton is an American politician who served as the 42nd President of the United States from 1993 to 2001. Inaugurated at age 46, he was the third-youngest president. He took office at the end of the Cold War, and was the first president of the baby boomer generation...
tried and failed to pass the Mexican Stabilization Act through Congress. However, use of the ESF allowed the provision of funds without the approval of the legislative branch. At the end of the crisis, the U.S. actually made a $500 million profit on the loans.