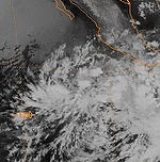 Encyclopedia
The 1979 Pacific hurricane season officially started May 15, 1979 in the eastern Pacific, and June 1, 1979 in the central Pacific, and lasted until November 30, 1979. These dates conventionally delimit the period of each year when most tropical cyclone
Tropical cyclone
A tropical cyclone is a storm system characterized by a large low-pressure center and numerous thunderstorms that produce strong winds and heavy rain. Tropical cyclones strengthen when water evaporated from the ocean is released as the saturated air rises, resulting in condensation of water vapor...
s form in the northeast Pacific Ocean
Pacific Ocean
The Pacific Ocean is the largest of the Earth's oceanic divisions. It extends from the Arctic in the north to the Southern Ocean in the south, bounded by Asia and Australia in the west, and the Americas in the east.At 165.2 million square kilometres in area, this largest division of the World...
.

A tropical disturbance formed on May 29 south of Manzanillo, Mexico
Manzanillo, Colima
The name Manzanillo refers to the city as well as its surrounding municipality in the Mexican state of Colima. The city, located on the Pacific Ocean, contains Mexico's busiest port. Manzanillo was the third port created by the Spanish in the Pacific during the New Spain period...
and moved slowly southwestward. On May 31, the storm was upgraded to tropical depression status based on satellite data. Shortly after becoming a depression, the storm turned northward over cooler waters where it rapidly weakened and dissipated 370 mi (595.5 km) southwest of Manzanillo. The only effects from the tropical depression was from a ship which reported heavy rainfall.

A depression formed on May 31, In early June, it became a hurricane, subsequently named Andres, and approached the Mexican coast as a large hurricane. The hurricane disintegrated rapidly as it approached the coast, and eventually made landfall as a weak depression on June 4. Initial reports indicated that the storm made landfall with winds of 60 mph (95 km/h); however, according to the Eastern Pacific Hurricane Database, the storm crossed the shore with winds of 75 mph (120 km/h).

Around Acapulco
Acapulco
Acapulco is a city, municipality and major sea port in the state of Guerrero on the Pacific coast of Mexico, southwest from Mexico City. Acapulco is located on a deep, semi-circular bay and has been a port since the early colonial period of Mexico’s history...
, airlines canceled flights in and out of the region on June 3 and resumed the following day after the passage of Andres. Torrential rainfall triggered widespread flooding which inundated homes and floated cars left on streets. High winds also downed power lines, leaving many residents without electricity. Offshore, two fishermen were killed by the storm after their boat capsized amidst rough seas.

A westward moving tropical disturbance from the Atlantic emerged into the Pacific Ocean
Pacific Ocean
The Pacific Ocean is the largest of the Earth's oceanic divisions. It extends from the Arctic in the north to the Southern Ocean in the south, bounded by Asia and Australia in the west, and the Americas in the east.At 165.2 million square kilometres in area, this largest division of the World...
over Costa Rica
Costa Rica
Costa Rica , officially the Republic of Costa Rica is a multilingual, multiethnic and multicultural country in Central America, bordered by Nicaragua to the north, Panama to the southeast, the Pacific Ocean to the west and the Caribbean Sea to the east....
and Panama
Panama
Panama , officially the Republic of Panama , is the southernmost country of Central America. Situated on the isthmus connecting North and South America, it is bordered by Costa Rica to the northwest, Colombia to the southeast, the Caribbean Sea to the north and the Pacific Ocean to the south. The...
on June 17. Continuing westward, the disturbance developed into the third tropical depression of the season on June 21. It further intensified and became Tropical Storm Blanca, eventually peaking as a relatively weak 50 mph (85 km/h) tropical storm. As Blanca was heading west-northwestward, it began to slowly weaken after peak intensity, and later dissipated on June 25. Blanca remained out at sea for the entire duration, and no fatalities or damage was reported as a result.

A tropical disturbance formed in the Gulf of Tehuantepec
Gulf of Tehuantepec
Gulf of Tehuantepec is a large body of water on the Pacific coast of the Isthmus of Tehuantepec, southeastern Mexico, at . Most of the hurricanes that form in the Eastern Pacific organize in or near this body of water...
on July 11. The system moved across the Gulf of Tehuantepec 9 mph (14 km/h) and gradually intensified. By late on July 14, satellites indicated a cyclonic circulation; the disturbance was promptly classified as Tropical Depression Four while 253 mi (407.2 km) west of Acapulco
Acapulco
Acapulco is a city, municipality and major sea port in the state of Guerrero on the Pacific coast of Mexico, southwest from Mexico City. Acapulco is located on a deep, semi-circular bay and has been a port since the early colonial period of Mexico’s history...
, Guerrero
Guerrero
Guerrero officially Estado Libre y Soberano de Guerrero is one of the 31 states which, with the Federal District, comprise the 32 Federal Entities of Mexico. It is divided in 81 municipalities and its capital city is Chilpancingo....
, Mexico. As the depression moved over sea surface temperatures (SST's) of 86 °F (30 °C), it rapidly intensified into Tropical Storm Carlos early on July 15. As Carlos headed westward at 23 mph (37 km/h), it continued to strengthen. By midday on July 15, Carlos attained its peak intensity with winds of 50 mph (85 km/h). Shortly thereafter, Carlos moved over slightly colder SST's, and a weakened trend began as a result. Early on July 16, Carlos was downgraded to a tropical depression and dissipated later that day.

On July 16, Tropical Depression Five formed approximately 190 mi (305.8 km) west-southwest of Puerto Vallarta
Puerto Vallarta
Puerto Vallarta is a Mexican balneario resort city situated on the Pacific Ocean's Bahía de Banderas.The 2010 census reported Puerto Vallarta's population as 255,725 making it the sixth-largest city in the state of Jalisco...
, Jalisco
Jalisco
Jalisco officially Estado Libre y Soberano de Jalisco is one of the 31 states which, with the Federal District, comprise the 32 Federal Entities of Mexico. It is located in Western Mexico and divided in 125 municipalities and its capital city is Guadalajara.It is one of the more important states...
, Mexico. The depression tracked northwestward and did not intensify into a tropical storm. Instead, the depression dissipated later that day.

Enrique was tied for the strongest storm of this season with Hurricane Ignacio, but did not affect land.

Guillermo originated from a tropical disturbance formed in the Gulf of Tehuantepec on September 7. The system moved northwestward at 17 mph (27 km/h), and was upgraded to Tropical Depression Ten on September 8. The depression quickly intensified, and became a tropical storm on September 9. Guillermo was a short-lived hurricane which did not have known affect land.

A tropical disturbance developed south of Guatemala
Guatemala
Guatemala is a country in Central America bordered by Mexico to the north and west, the Pacific Ocean to the southwest, Belize to the northeast, the Caribbean to the east, and Honduras and El Salvador to the southeast...
on October 1. The system intensified as it moved west over SST's of at least 82 °F (27.8 °C). By early on October 4, the system was classified as Tropical Depression Eleven. After forming, the depression continued west 15 mph (24 km/h) over SST's of 84 °F (28.9 °C). The depression eventually turned west-northwest, where it intensified into Tropical Storm Hilda on October 5. Hilda was a short-lived storm which did not affect land.

On October 22, a well-organized area of low pressure formed a few hundred miles of the coast of Guatemala
Guatemala
Guatemala is a country in Central America bordered by Mexico to the north and west, the Pacific Ocean to the southwest, Belize to the northeast, the Caribbean to the east, and Honduras and El Salvador to the southeast...
. The next day, the Eastern Pacific Hurricane Center
Eastern Pacific Hurricane Center
The Eastern Pacific Hurricane Center was formerly the Regional Specialized Meteorological Center responsible for forecasting Pacific hurricanes in the eastern north Pacific east of 140°W...
upgraded the low into a depression. The system would strengthen into a tropical storm hours prior to formation. The system strengthen into a tropical storm, which was named Ignacio. On October 25, Tropical Storm Ignacio strengthened into a minimal hurricane on October 26. It quickly intensified, becoming a major hurricane a few hours later. On October 27, Ignacio reached its peak intensity with winds of up to 145 mph (130 km/h). On October 28, however, the storm began to weaken, and was downgraded into a Category 1 hurricane. On October 29, it weakened into a tropical storm. The system weakened to a depression on October 30. Ignacio made landfall on the coast of western Mexico
Mexico
The United Mexican States , commonly known as Mexico , is a federal constitutional republic in North America. It is bordered on the north by the United States; on the south and west by the Pacific Ocean; on the southeast by Guatemala, Belize, and the Caribbean Sea; and on the east by the Gulf of...
as a tropical depression. The storm dissipated hours later after landfall, without causing any impact.

The final tropical cyclone of the season developed from a tropical disturbance which formed 92 mi (148 km) south of Panama on November 13. The system headed west-northwest at 8 mph (12.9 km/h) until curving westward and speeding up to 11 mph (17.7 km/h) on the following day. As the disturbance intensified over SST's of 84 °F (28.9 °C), satellite imagery indicated that a cyclonic circulation existed. As a result, the disturbance was upgraded to Tropical Depression Thirteen while 210 mi (338 km) west-southwest of the Cabo Blanco Absolute Natural Reserve
Cabo Blanco Absolute Natural Reserve
The Cabo Blanco Absolute Natural Reserve is a Nature Reserve of Costa Rica, part of the Tempisque Conservation Area in the province of Puntarenas, covering an area of terrestrial and marine on the southern tip of the Nicoya Peninsula near Mal Pais....
on November 15. The depression steadily intensified as it headed westward, and was upgraded to Tropical Storm Jimena later that day. On the following day, Jimena turned west-northwestward and continued to intensify. Later that day, Jimena peaked with maximum sustained winds of 65 mph (100 km/h). Also on November 16, Jimena curved briefly northwestward. After resuming its westward direction, Jimena began to weaken from SST's of 82 °F (27.8 °C) and cold, dry, and northerly winds from the Gulf of Tehuantepec. By early on November 18, Jimena weakened enough to be downgraded to a tropical depression. Shortly thereafter, Jimena was declared dissipated while centered 426 mi (685.6 km) south of Acapulco, Guerrero, Mexico.

The following names were used for named storms that formed in the eastern Pacific in 1979. This was the first time these names were used. Names that were not assigned are marked in gray.


The central Pacific used names and numbers from the west Pacific's typhoon list. No names were used.