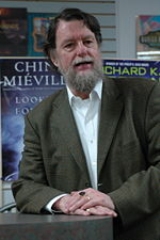 Quotations
Robert Jordan was the pen name of James Oliver Rigney, Jr. (October 17, 1948–September 16, 2007), under which he is best known as the author of the bestselling The Wheel of Time fantasy series. He also wrote under the name Reagan O'Neal.

See also: The Wheel of Time


The Wheel of Time (series)