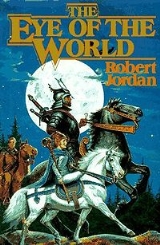 Overview
The Wheel of Time is a series of epic fantasy novels written by American
United States
The United States of America is a federal constitutional republic comprising fifty states and a federal district...
author James Oliver Rigney, Jr., under the pen name
Pen name
A pen name, nom de plume, or literary double, is a pseudonym adopted by an author. A pen name may be used to make the author's name more distinctive, to disguise his or her gender, to distance an author from some or all of his or her works, to protect the author from retribution for his or her...
Robert Jordan
Robert Jordan
Robert Jordan was the pen name of James Oliver Rigney, Jr. , under which he was best known as the author of the bestselling The Wheel of Time fantasy series. He also wrote under the pseudonyms Reagan O'Neal and Jackson O'Reilly.-Biography:Jordan was born in Charleston, South Carolina...
. Originally planned as a six-book series, the length was increased by increments; at the time of Rigney's death, he expected it to be 12, but it will actually run 14. There is also a prequel novel and a companion book available. Rigney began writing the first volume, The Eye of the World
The Eye of the World
The Eye of the World is the first book of The Wheel of Time fantasy series written by American author Robert Jordan. It was published by Tor Books and released on January 15, 1990. The unabridged audio book is read by Michael Kramer and Kate Reading...
, in 1984 and it was published in January 1990.

The author died in 2007 while working on what was planned to be the final volume in the series, although he had prepared extensive notes so another author could complete the book according to his wishes.

The Wheel of Time turns, and Ages come and pass, leaving memories that become legend. Legend fades to myth, and even myth is long forgotten when the Age that gave it birth comes again.

"Lord of the Morning, I have come for you!"

"Yes, Betrayer of Hope. So have men named me, just as they named you Dragon, but unlike you I embrace the name. They gave me the name to revile me, but I will yet make them kneel and worship it."

"For what else you have done, there can be no forgiveness, Betrayer, but for Ilyena's death I will destroy you beyond anything your master can repair."

"In wars, boy, fools kill other fools for foolish causes."

"Weep for Manetheren. Weep for what is lost forever."

"What is already woven cannot be undone. It will not make the trees grow again for you to bring the building down on our heads."

"Think if you want to stay alive. Fear will kill you if you don't control it."

"You'll use it [Perrin's axe], boy, and as long as you hate using it, you would use it more wisely than most men would. Wait. If ever you don't hate it any longer, then will be the time to throw it as far as you can and run the other way."