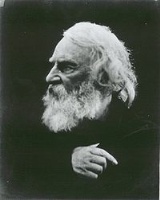 Quotations
Henry Wadsworth Longfellow (27 February 1807 – 24 March 1882) was an American poet and one of the five members of the group known as the Fireside Poets.