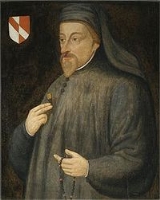 Quotations
Geoffrey Chaucer was an English author, poet, philosopher, bureaucrat (courtier), and diplomat. Chaucer is best known as the author of The Canterbury Tales. He is sometimes credited with being the first author to demonstrate the artistic legitimacy of the vernacular English language, rather than French or Latin.