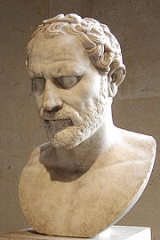 Quotations
Demosthenes (384 BC - 322 BC) was a prominent Greek statesman and orator of ancient Athens, generally considered the greatest of the Greek orators.