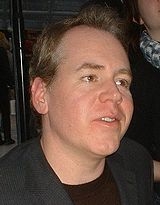 Quotations
Bret Easton Ellis is an American author. He is considered to be one of the major Generation X authors and was regarded as one of the so-called literary Brat Pack.


"We'll slide down the surface of things..."
"'As a genereal rule you shouldn't expect too much from people darling,' and then i kiss her on the cheek.