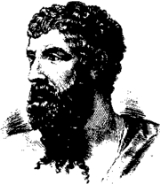 Quotations
Aristophanes was a Greek poet and playwright of the Old Comedy, also known as the Father of Comedy and the Prince of Ancient Comedy. Of his forty plays, eleven are extant, plus a thousand fragments of the others.

Each quote is often given in multiple versions: always the translation at Perseus (usually reliable literal translation with hypertext original Greek available) and often another, more oft-quoted translation. For identical translations, the earliest translator found is given. Character names may vary between editions (from different transliteration, translation, or attribution) and are thus always given on the same line as each translation.

For editions and translations, missing or conflicting information was primarily checked in Walton 2006.