On the Corinthian column (which used to be of red marble), 8.5 m high, a sculpture of the King, 2.75-metres high, in archaistic armour is placed. Sigismund's Column now stands at 22 metres and is adorned by four eagles. The king is dressed in armor and carries a cross in one hand and wields a sword in the other. 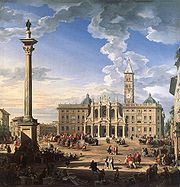 17th century
Erected between 1643 and 1644, the column was constructed on the orders of Sigismund's son and successor, King Władysław IV Vasa
Władysław IV Vasa
Władysław IV Vasa was a Polish and Swedish prince from the House of Vasa. He reigned as King of the Polish–Lithuanian Commonwealth from 8 November 1632 to his death in 1648....
. It was designed by the Italian-born architect Constantino Tencalla and the sculptor Clemente Molli, and cast by Daniel Tym. The Zygmunt's Column was modelled on the Italian columns in front of Basilica di Santa Maria Maggiore
Basilica di Santa Maria Maggiore
The Papal Basilica of Saint Mary Major , known also by other names, is the largest Roman Catholic Marian church in Rome, Italy.There are other churches in Rome dedicated to Mary, such as Santa Maria in Trastevere, Santa Maria in Aracoeli, Santa Maria sopra Minerva, but the greater size of the...
(erected in 1614 to designs of Carlo Maderno
Carlo Maderno
Carlo Maderno was a Swiss-Italian architect, born in Ticino, who is remembered as one of the fathers of Baroque architecture. His façades of Santa Susanna, St. Peter's Basilica and Sant'Andrea della Valle were of key importance in the evolution of the Italian Baroque...
), and the Column of Phocas
Column of Phocas
The Column of Phocas , is a Roman monumental column in the Roman Forum of Rome, Italy. Erected before the Rostra and dedicated or rededicated in honour of the Eastern Roman Emperor Phocas on August 1, 608, was the last addition made to the Forum Romanum...
in Rome (Władysław Vasa seen both of them during his visit to Rome in 1625).

In 1681 the monument was surrounded with a wooden fence, which was later replaced with a permanent iron fence.

18th and 19th centuries
The marble column itself was renovated several times in the next few centuries, most notably in 1743, 1810, 1821 and 1828. In 1854 the monument was surrounded with a fountain featuring marble triton
Triton (mythology)
Triton is a mythological Greek god, the messenger of the big sea. He is the son of Poseidon, god of the sea, and Amphitrite, goddess of the sea, whose herald he is...
s sculpted by the German, August Kiss
August Kiss
August Karl Eduard Kiss was a German sculptor.Kiss studied at the Berlin Academy under Christian Rauch, Tieck and Schinkel...
.

In 1863 the column was renovated somewhat again, but still needed work, and between 1885 and 1887 it was replaced with a new column of granite
Granite
Granite is a common and widely occurring type of intrusive, felsic, igneous rock. Granite usually has a medium- to coarse-grained texture. Occasionally some individual crystals are larger than the groundmass, in which case the texture is known as porphyritic. A granitic rock with a porphyritic...
. Between 1927 and 1930, the monument was again renovated, and was restored to its original appearance when the fountain and the fence around it were removed.

20th century
On 1 September 1944, during the Warsaw Uprising
Warsaw Uprising
The Warsaw Uprising was a major World War II operation by the Polish resistance Home Army , to liberate Warsaw from Nazi Germany. The rebellion was timed to coincide with the Soviet Union's Red Army approaching the eastern suburbs of the city and the retreat of German forces...
, the monument was demolished by the Germans
Planned destruction of Warsaw
The planned destruction of Warsaw refers to the largely realised plans by Nazi Germany to completely raze the city. The plan was put into full motion after the Warsaw Uprising in 1944...
, and its bronze statue was badly damaged. After the war the statue was repaired, and in 1949 it was set up on a new column, made of granite from the Strzegom
Strzegom
Strzegom is a town in Świdnica County, Lower Silesian Voivodeship, in south-western Poland. It is the seat of the administrative district called Gmina Strzegom. It lies approximately north-west of Świdnica, and west of the regional capital Wrocław...
mine, a couple of metres from the original site. The original broken pieces of the column can still be seen lying next to the Royal Castle.