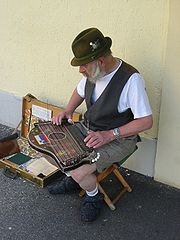 The word "citara" is derived from the Greek word kithara
Kithara
The kithara or cithara was an ancient Greek musical instrument in the lyre or lyra family. In modern Greek the word kithara has come to mean "guitar" ....
, an instrument from classical times used in Ancient Greece
Ancient Greece
Ancient Greece is a civilization belonging to a period of Greek history that lasted from the Archaic period of the 8th to 6th centuries BC to the end of antiquity. Immediately following this period was the beginning of the Early Middle Ages and the Byzantine era. Included in Ancient Greece is the...
and later throughout the Roman Empire
Roman Empire
The Roman Empire was the post-Republican period of the ancient Roman civilization, characterised by an autocratic form of government and large territorial holdings in Europe and around the Mediterranean....
and in the Arab world (Arabic قيثارة); the word "guitar
Guitar
The guitar is a plucked string instrument, usually played with fingers or a pick. The guitar consists of a body with a rigid neck to which the strings, generally six in number, are attached. Guitars are traditionally constructed of various woods and strung with animal gut or, more recently, with...
" derives from "kithara" as well.

While the term zither is mentioned in Daniel
Daniel
Daniel is the protagonist in the Book of Daniel of the Hebrew Bible. In the narrative, when Daniel was a young man, he was taken into Babylonian captivity where he was educated in Chaldean thought. However, he never converted to Neo-Babylonian ways...
during the Jewish exile of 606 BC, the earliest known instrument of the zither family is a Chinese guqin
Guqin
The guqin is the modern name for a plucked seven-string Chinese musical instrument of the zither family...
[a fretless instrument], found in the tomb of Marquis Yi of Zeng
Tomb of Marquis Yi of Zeng
The Tomb of Marquis Yi of Zeng is an important archaeological site in Suizhou, Hubei, China, dated sometime after 433 BCE. The tomb contained the remains of Marquis Yi of Zeng...
dating from 433 BC
433 BC
Year 433 BC was a year of the pre-Julian Roman calendar. At the time, it was known as the Year of the Tribunate of Vibulanus, Fidenas and Flaccinator...
, featuring tuning pegs, a bridge and goose-like feet. In modern entertainment, the zither is perhaps most famous for its role in the soundtrack
Soundtrack
A soundtrack can be recorded music accompanying and synchronized to the images of a motion picture, book, television program or video game; a commercially released soundtrack album of music as featured in the soundtrack of a film or TV show; or the physical area of a film that contains the...
, especially in the opening scene of the classic noir
Film noir
Film noir is a cinematic term used primarily to describe stylish Hollywood crime dramas, particularly those that emphasize cynical attitudes and sexual motivations. Hollywood's classic film noir period is generally regarded as extending from the early 1940s to the late 1950s...
film The Third Man
The Third Man
The Third Man is a 1949 British film noir, directed by Carol Reed and starring Joseph Cotten, Alida Valli, Orson Welles, and Trevor Howard. Many critics rank it as a masterpiece, particularly remembered for its atmospheric cinematography, performances, and unique musical score...
. The music for the film was played by Anton Karas
Anton Karas
Anton Karas was a Viennese zither player, best known for his soundtrack to Carol Reed's The Third Man.-Early life:...
. It is also the preferred music of Mr. Bevis, a Twilight Zone character in 1960. 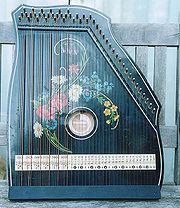 The instrument has a prominent solo in one of Johann Strauss II
Johann Strauss II
Johann Strauss II , also known as Johann Baptist Strauss or Johann Strauss, Jr., the Younger, or the Son , was an Austrian composer of light music, particularly dance music and operettas. He composed over 500 waltzes, polkas, quadrilles, and other types of dance music, as well as several operettas...
's most famous waltzes, "Tales from the Vienna Woods" (sometimes played on a mandolin, when a zither is not available). It is also used by multi-instrumentalist Laraaji
Laraaji
Laraaji is an American musician. Born Edward Larry Gordon in Philadelphia, he studied violin, piano, trombone and voice in his early years in New Jersey. He attended Howard University, a historically black university in Washington, D.C. on a scholarship to study composition and piano...
on the third release of Brian Eno
Brian Eno
Brian Peter George St. John le Baptiste de la Salle Eno , commonly known as Brian Eno or simply as Eno , is an English musician, composer, record producer, singer and visual artist, known as one of the principal innovators of ambient music.Eno studied at Colchester Institute art school in Essex,...
's ambient music
Ambient music
Ambient music is a musical genre that focuses largely on the timbral characteristics of sounds, often organized or performed to evoke an "atmospheric", "visual" or "unobtrusive" quality.- History :...
series, Ambient 3: Day of Radiance
Day of Radiance
Ambient 3: Day of Radiance is an album by the American ambient musician Laraaji which was produced by Brian Eno.-Overview:...
. In more popular music, Australian-born singer Shirley Abicair
Shirley Abicair
Shirley Abicair is an Australian-born singer, musician, TV personality, actress and author.-Early life:Shirley Abicair was born in Melbourne, Australia. Some sources show her year of birth as 1935, but a contemporary account shows she was 23 or 24 on arrival in England and, as she had completed...
popularised the zither when she used it widely as accompaniment in her popular TV shows, live performances and recordings in Britain in the 1950s and 1960s. More recently, Jerusalem-based multi-instrumentalist Bradley Fish
Bradley Fish
Bradley Fish is an American born musician based in Israel. He relocated to Israel in 2004, first living in Tel Aviv, and finally settling in Jerusalem.He holds a B.A...
has used zithers in a multitude of styles on the soundtracks of various Sony Digital Pictures films. In Slovenia
Slovenia
Slovenia , officially the Republic of Slovenia , is a country in Central and Southeastern Europe touching the Alps and bordering the Mediterranean. Slovenia borders Italy to the west, Croatia to the south and east, Hungary to the northeast, and Austria to the north, and also has a small portion of...
, at the end of the 19th century they were used in small towns or villages and for concerts.

Like many other stringed instruments, acoustic and electric
Electric instrument
An electric musical instrument is one in which the use of electric devices determines or affects the sound produced by an instrument. It is also known as an amplified musical instrument due to the common utilization of an electronic instrument amplifier to project the intended sound as determined...
forms exist; in the acoustic version, the strings are stretched across the length of the soundbox, and neither version has a neck. They can be divided into two classes: fret
Fret
A fret is a raised portion on the neck of a stringed instrument, that extends generally across the full width of the neck. On most modern western instruments, frets are metal strips inserted into the fingerboard...
ted and fretless. A person who plays the zither is called a zitherist.