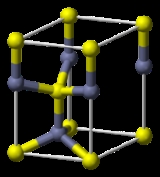 Overview
Zinc oxide is an inorganic compound
Inorganic compound
Inorganic compounds have traditionally been considered to be of inanimate, non-biological origin. In contrast, organic compounds have an explicit biological origin. However, over the past century, the classification of inorganic vs organic compounds has become less important to scientists,...
with the formula
Chemical formula
A chemical formula or molecular formula is a way of expressing information about the atoms that constitute a particular chemical compound....
ZnO. It is a white powder that is insoluble in water. The powder is widely used as an additive into numerous materials and products including plastics, ceramics, glass, cement, rubber (e.g., car tires), lubricants, paints, ointments, adhesives, sealants, pigments, foods (source of Zn nutrient
Nutrient
A nutrient is a chemical that an organism needs to live and grow or a substance used in an organism's metabolism which must be taken in from its environment. They are used to build and repair tissues, regulate body processes and are converted to and used as energy...
), batteries, ferrites, fire retardants, first aid tapes, etc. ZnO is present in the Earth's crust as the mineral zincite
Zincite
Zincite is the mineral form of zinc oxide . Its crystal form is rare in nature; a notable exception to this is at the Franklin and Sterling Hill Mines in New Jersey, an area also famed for its many fluorescent minerals. It has a hexagonal crystal structure and a color that depends on the presence...
, however, most ZnO used commercially is synthetic.

In materials science
Materials science
Materials science is an interdisciplinary field applying the properties of matter to various areas of science and engineering. This scientific field investigates the relationship between the structure of materials at atomic or molecular scales and their macroscopic properties. It incorporates...
, ZnO is a wide-bandgap semiconductor of the II-VI semiconductor group (since zinc
Zinc
Zinc , or spelter , is a metallic chemical element; it has the symbol Zn and atomic number 30. It is the first element in group 12 of the periodic table. Zinc is, in some respects, chemically similar to magnesium, because its ion is of similar size and its only common oxidation state is +2...
and oxygen
Oxygen
Oxygen is the element with atomic number 8 and represented by the symbol O. Its name derives from the Greek roots ὀξύς and -γενής , because at the time of naming, it was mistakenly thought that all acids required oxygen in their composition...
belong to the 2nd and 6th groups of the periodic table
Periodic table
The periodic table of the chemical elements is a tabular display of the 118 known chemical elements organized by selected properties of their atomic structures. Elements are presented by increasing atomic number, the number of protons in an atom's atomic nucleus...
, respectively).

How can we calculate the band gap energy of zinc oxide nanorods?

I want to make thin film ZnO by sol-gel route, i use zinc acetate dyhidrat (ZAD) as precursor. i have made a sol from ZAD with ethanol as solvent...
More