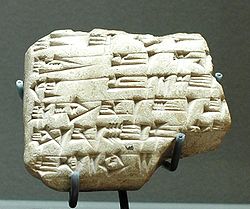 Zimrilim was king of Mari
Mari, Syria
Mari was an ancient Sumerian and Amorite city, located 11 kilometers north-west of the modern town of Abu Kamal on the western bank of Euphrates river, some 120 km southeast of Deir ez-Zor, Syria...
from about 1775 to 1761 BCE.

Zimrilim ruled Mari for about thirteen years, and campaigned extensively to establish his power in the neighbouring areas along the Euphrates and the Khabur
Khabur River
The Khabur River , , , ) is the largest perennial tributary to the Euphrates in Syrian territory. Although the Khabur originates in Turkey, the karstic springs around Ra's al-'Ayn are the river's main source of water. Several important wadis join the Khabur north of Al-Hasakah, together creating...
valley. He extended his palace in the city, which was possibly the largest at the time, and certainly the envy of other kings.

He was also active on a wider stage, and at one time (perhaps about 1764 BCE) was allied with Hammurabi
Hammurabi
Hammurabi Hammurabi Hammurabi (Akkadian from Amorite ʻAmmurāpi, "the kinsman is a healer", from ʻAmmu, "paternal kinsman", and Rāpi, "healer"; (died c...
in his wars against Eshnunna
Eshnunna
Eshnunna was an ancient Sumerian city and city-state in central Mesopotamia. Although situated in the Diyala Valley north-east of Sumer proper, the city nonetheless belonged securely within the Sumerian cultural milieu.The tutelary deity of the city was Tishpak .- History :Occupied from the Jemdet...
.

Zimrilim's personal life is partly known through tablets preserved in the state archive of Mari. He married Shibtu
Shibtu
Shibtu, described by some as "the most prominent of the Mari ladies", was queen of Mari. She was the daughter of Yarimlim and the wife and personal representative of King Zimrilim, and held considerable political influence....
, a princess of Yamkhad (Aleppo and surrounding territory), and is known to have had at least eight daughters through various wives. Several of his daughters were married to rulers of local towns, and two others are known to have become priestesses. Correspondence between the king and his daughters provides evidence that Zimrilim thought highly of women and considered them competent at making decisions.

In 1762 BCE, Hammurabi conquered and sacked Mari (though it may be that the city had surrendered without a fight), despite the previous alliance. At this time Zimrilim disappears from historical view, and is presumed to have been killed.

It has been asserted before that Belassunu
Belassunu
Belassunu was an Assyrian princess of Karana .-History:Belassunu was the daughter of Samu-addu, King of Karana , perhaps by his wife Ama-duga, and she was sister to Queen Iltani, wife of the usurper King Aqba-Hammu. Details of Belassunu's life are known from surviving letters from the former...
was one of his secondary wives, but this is now believed to be incorrect.
The source of this article is wikipedia, the free encyclopedia.  The text of this article is licensed under the GFDL.