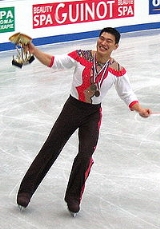 Encyclopedia
Zhang Hao is the capital and largest city of Heilongjiang Province in Northeast China, lying on the southern bank of the Songhua River...
, Heilongjiang
Heilongjiang
For the river known in Mandarin as Heilong Jiang, see Amur River' is a province of the People's Republic of China located in the northeastern part of the country. "Heilongjiang" literally means Black Dragon River, which is the Chinese name for the Amur. The one-character abbreviation is 黑...
, China
People's Republic of China
China , officially the People's Republic of China , is the most populous country in the world, with over 1.3 billion citizens. Located in East Asia, the country covers approximately 9.6 million square kilometres...
) is a Chinese figure skater
Figure skating
Figure skating is an Olympic sport in which individuals, pairs, or groups perform spins, jumps, footwork and other intricate and challenging moves on ice skates. Figure skaters compete at various levels from beginner up to the Olympic level , and at local, national, and international competitions...
. With partner Zhang Dan
Zhang Dan
Zhang Dan is a Chinese pair skater. With her partner Zhang Hao, she is the 2006 Olympic silver medalist, 2005 & 2010 Four Continents champion, and three time World silver medalist.-Biography:...
, he is the 2006 Olympic silver medalist, 2005 & 2010 Four Continents champion
Four Continents Figure Skating Championships
The Four Continents Figure Skating Championships is an annual figure skating competition. The International Skating Union established it in 1999 to provide skaters representing non-European countries with a similar competition to the much older European Figure Skating Championships and a chance...
, and three time (2006, 2008–2009) World silver medalist
World Figure Skating Championships
The World Figure Skating Championships is an annual figure skating competition sanctioned by the International Skating Union in which elite figure skaters compete for the title of World Champion...
.

Zhang Hao previously competed with Zhang Liyun. He teamed up with Zhang Dan
Zhang Dan
Zhang Dan is a Chinese pair skater. With her partner Zhang Hao, she is the 2006 Olympic silver medalist, 2005 & 2010 Four Continents champion, and three time World silver medalist.-Biography:...
in 1997. They are not related. They immediately had a lot of success on the junior circuit. They won two medals on the Junior Grand Prix in their first year on it and then placed 5th at the Junior Grand Prix Final. They also won the bronze medal at the 1999 Chinese national championships and the silver at the 2000 Chinese national championships.

In the 2000-2001 season, they won the Junior Grand Prix Final, placed third at nationals, and then won Junior Worlds. At the 2000 Junior Worlds, they performed a quadruple twist, the first quad twist ever performed at that event.

They stayed junior in the 2001-2002 season, winning the Junior Grand Prix Final yet again. They won the bronze medal at the 2002 Four Continents Championships and then went to the 2002 Olympics, where they placed 11th. They went to their first Worlds and came in 9th.

In the 2002-2003 season, they did both Junior and senior Grand Prix, due to ISU
International Skating Union
The International Skating Union is the international governing body for competitive ice skating disciplines, including figure skating, synchronized skating, speed skating, and short track speed skating. It was founded in Scheveningen, Netherlands in 1892, making it one of the oldest international...
rules that pairs can do both in one season. They won the Junior Grand Prix event in China, then performed well at both their Grand Prix events, placing 4th in both of them. They went to Junior Worlds and once again won it before going to Worlds and placing 6th.

Following that season, Zhang and Zhang became serious contenders. They consistently medaled at their Grand Prix events. They won the 2005 Four Continents Championships and then won the bronze at the 2005 Worlds.

In the 2006-2007 season, Zhang and Zhang placed first at Skate Canada, second at the NHK Trophy, and would go on to place third at the Grand Prix Final. They placed 5th at the 2007 World Figure Skating Championships later that season.

The 2009-2010 season saw them make their third trip to the Olympics and they placed fifth. At the 2010 Worlds they also placed fifth.

They decided to continue to competing but had to pull out of the 2010-2011 Grand Prix season because Hao broke his finger.

On February 14, 2011, the Zhangs' ages became the subject of controversy. Although his International Skating Union bio lists Zhang Hao as born on July 6, 1984, a Chinese skating association website suggested he was born on February 6, 1982. This would mean he was too old to compete in junior events during the 2002-03 season, such as the 2003 World Junior Championships
2003 World Junior Figure Skating Championships
The World Junior Figure Skating Championships is an annual event sanctioned by the International Skating Union in which junior age eligible figure skaters compete for the title of World Junior Champion...
where they won gold. His partner's age also came under scrutiny. Her ISU bio states that she was born on October 4, 1985 but the Chinese website suggested she was born on that day in 1987, meaning she was 14 and too young to compete in senior events during the 2001-02 season, such as the Four Continents where they won bronze, as well as the Olympics and World Championships. The dates disappeared from the website by February 15. On February 17, the ISU said there were no discrepancies for the Zhangs in terms of the birthdates listed on their passports, ISU registration forms and the Chinese Olympic Committee's website.