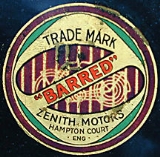 Encyclopedia
Zenith Motorcycles was a British motorcycle
Motorcycle
A motorcycle is a single-track, two-wheeled motor vehicle. Motorcycles vary considerably depending on the task for which they are designed, such as long distance travel, navigating congested urban traffic, cruising, sport and racing, or off-road conditions.Motorcycles are one of the most...
manufacturer established in Finsbury Park
Finsbury Park, London
Finsbury Park is an area in north London, England which grew up around an important railway interchange at the junction of the London Boroughs of Islington, Haringey and Hackney...
, London in 1904. Zenith motorcycles used engines from various suppliers, including Precision
Beardmore Precision Motorcycles
Beardmore Precision Motorcycles was a British motorcycle manufacturer. The original Precision company was set up by Frank E.Baker in Birmingham. Frank Baker quickly established a reputation for performance motorcycle engines and supplied Haden, and Sun Motorcycles...
, Villiers
Villiers
-Places:In Canada* Villiers, Ontario, a small settlement near PeterboroughIn France* Villiers, Indre, in the Indre département* Villiers, Vienne, in the Vienne département* Villiers-Adam, in the Val-d'Oise département...
and JAP
JAP
Jap or JAP may refer to:* Journal of Applied Physics, scientific journal published by American Institute of Physics* Journal of Applied Physiology, scientific journal published by American Physiological Society...
. Under chief engineer Frederic "Freddy" Barnes, Zenith developed the "Gradua" gear, a variable pulley which adjusted the length of the drive belt by sliding the rear wheel backwards or forwards in the slots. This gave Zenith a great advantage which competitors claimed was unfair and many clubs banned the Gradua Zeniths, who simply included the word "Barred" in their badge.

In the 1930s Zenith hit hard times and closed down production, but the name was bought by Writers of Kennington, who had been one of their main dealers, and production restarted at the Hampton Court factory in Surrey
Surrey
Surrey is a county in the South East of England and is one of the Home Counties. The county borders Greater London, Kent, East Sussex, West Sussex, Hampshire and Berkshire. The historic county town is Guildford. Surrey County Council sits at Kingston upon Thames, although this has been part of...
. The Second World War stopped production again, but they managed to stockpile enough 750 cc JAP
JAP
Jap or JAP may refer to:* Journal of Applied Physics, scientific journal published by American Institute of Physics* Journal of Applied Physiology, scientific journal published by American Physiological Society...
engines to continue straight after the war. JAP had ceased production, however, therefore once the last engine had been used it was the end of the line for Zenith and they finally closed in 1950.