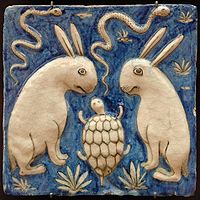 Abu Yahya Zakariya' ibn Muhammad al-Qazwini (أبو يحيئ زكريا بن محمد القزويني) (born 1203 - died 1283), was a Persian
Persian people
The Persian people are part of the Iranian peoples who speak the modern Persian language and closely akin Iranian dialects and languages. The origin of the ethnic Iranian/Persian peoples are traced to the Ancient Iranian peoples, who were part of the ancient Indo-Iranians and themselves part of...
physician, astronomer, geographer and proto-science fiction
Science fiction
Science fiction is a genre of fiction dealing with imaginary but more or less plausible content such as future settings, futuristic science and technology, space travel, aliens, and paranormal abilities...
writer
Persian literature
Persian literature spans two-and-a-half millennia, though much of the pre-Islamic material has been lost. Its sources have been within historical Persia including present-day Iran as well as regions of Central Asia where the Persian language has historically been the national language...
.

Born in the Persian town of Qazvin
Qazvin
Qazvin is the largest city and capital of the Province of Qazvin in Iran. At the 2006 census, its population was 349,821, in 96,420 families....
, he is descended from Anas ibn Malik
Anas ibn Malik
Anas bin Malik ibn Nadar al-Khazraji Al-Ansari was a well-known sahabi of the Islamic prophet Muhammad.He was an Ansar of the Banu Khazraj . He is not to be confused with Malik ibn Anas. Anas ibn Malik, the last of the Companions of the Prophet died at al-Basrah in 93 AH aged 103.-Muhammad's...
, Zakariya' ibn Muhammad al-Qazwini served as legal expert and judge (qadhi) in several localities in Persia and at Baghdad. He travelled around in Mesopotamia and Syria, and finally entered the circle patronized by the governor of Baghdad
Baghdad
Baghdad is the capital of Iraq, as well as the coterminous Baghdad Governorate. The population of Baghdad in 2011 is approximately 7,216,040...
, ‘Ata-Malik Juwayni
Ata al-Mulk Juvayni
Atâ-Malek Jovayni was a Persian historian who wrote an account of the Mongol Empire entitled Ta' rīkh-i jahān-gushā .He was born in Juvain, a city in Khorasan in northeastern Iran...
(d. 1283 CE).

It was to the latter that al-Qazwini dedicated his famous Arabic-language cosmography
Cosmography
Cosmography is the science that maps the general features of the universe, describing both heaven and Earth...
titled 'Aja'ib al-makhluqat wa-ghara'ib al-mawjudat
'Aja'ib al-makhluqat wa-ghara'ib al-mawjudat
ʿAjā'ib al-makhlūqāt wa gharā'ib al-mawjūdāt is an important work of cosmography by Zakariya ibn Muhammad ibn Mahmud Abu Yahya al-Qazwini who was born in Qazwin year 600 /1203.-Background to the work:...
عجائب المخلوقات و غرائب الموجودات ("Marvels of Creatures and Strange Things Existing"). This treatise, frequently illustrated, was immensely popular and is preserved today in many copies. It was translated into Persian and Turkish.

Qazwini was also well-known for his geographical dictionary, Athar al-bilad wa-akhbar al-‘ibad اثار البلاد واخبار العباد ("Monument of Places and History of God's Bondsmen"). Both of these treatises reflect extensive reading and learning in a wide range of disciplines.

Al-Qazwini also wrote a futuristic proto-science fiction
Science fiction
Science fiction is a genre of fiction dealing with imaginary but more or less plausible content such as future settings, futuristic science and technology, space travel, aliens, and paranormal abilities...
Arabic tale
Arabic literature
Arabic literature is the writing produced, both prose and poetry, by writers in the Arabic language. The Arabic word used for literature is adab which is derived from a meaning of etiquette, and implies politeness, culture and enrichment....
entitled Awaj bin Anfaq, about a man who travelled to Earth from a distant planet.

Al-Qazwini mentioned how alchemists dubbed "swindlers" claimed to have carried out the transmutation of metals into gold
Gold
Gold is a chemical element with the symbol Au and an atomic number of 79. Gold is a dense, soft, shiny, malleable and ductile metal. Pure gold has a bright yellow color and luster traditionally considered attractive, which it maintains without oxidizing in air or water. Chemically, gold is a...
, al-Qazwini states: they ruined the development of the science of chemistry, by fooling powerful rulers such as Imad ad-Din Zengi
Zengi
Imad ad-Din Zengi was the atabeg of Mosul, Aleppo, Hama and Edessa and founder of the Zengid dynasty, to which he gave his name.-Early life:...
and thus many scholars and various colleagues turned against alchemy
Alchemy
Alchemy is an influential philosophical tradition whose early practitioners’ claims to profound powers were known from antiquity. The defining objectives of alchemy are varied; these include the creation of the fabled philosopher's stone possessing powers including the capability of turning base...
thus resulting in the isolation of the science.

His cosmography has been edited by F. Wüstenfeld, ‘Aja'ib al-makhluqat (Göttingen, 1849), and a partial German translation by A. Giese, Al-Qazwini, Die Wunder des Himmels und der Erde (Stuttgart and Vienna, 1986).

His geographical dictionary was edited by Wüstenfeld as Athar al-bilad (Göttingen, 1848).