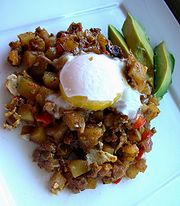 Yukon Gold hash is a cooked potato, vegetable and meat hash
Hash (food)
Hash is a dish consisting of meat, potatoes, and spices, that are mashed together into a smooth, creamy consistency, and then cooked either alone or with other ingredients such as onions....
topped with eggs. Named for one of its chief ingredients, the Yukon Gold potato
Yukon Gold potato
Yukon Gold is a large variety of potato most distinctly characterized by its smooth eye free skin and yellow tinged flesh. This variety of potato was developed in 1960’s by G. R. Johnston and R.G. Rowberry in Guelph, Ontario, Canada at the University of Guelph...
, it is usually eaten as a breakfast meal and has several variations, including a vegetarian version.