Encyclopedia
The assassination of Yitzhak Rabin
Yitzhak Rabin
' was an Israeli politician, statesman and general. He was the fifth Prime Minister of Israel, serving two terms in office, 1974–77 and 1992 until his assassination in 1995....
took place on November 4, 1995 (12th of Marcheshvan, 5756 on the Hebrew Calendar) at 21:30, at the end of a rally
Demonstration (people)
A demonstration or street protest is action by a mass group or collection of groups of people in favor of a political or other cause; it normally consists of walking in a mass march formation and either beginning with or meeting at a designated endpoint, or rally, to hear speakers.Actions such as...
in support of the Oslo Accords
Oslo Accords
The Oslo Accords, officially called the Declaration of Principles on Interim Self-Government Arrangements or Declaration of Principles , was an attempt to resolve the ongoing Palestinian-Israeli conflict...
at the Kings of Israel Square
Rabin Square
Rabin Square , formerly Kings of Israel Square , is the largest open public city square in central Tel Aviv, Israel. Over the years it has been the site of numerous political rallies, parades, and other public events...
in Tel Aviv
Tel Aviv
Tel Aviv , officially Tel Aviv-Yafo , is the second most populous city in Israel, with a population of 404,400 on a land area of . The city is located on the Israeli Mediterranean coastline in west-central Israel. It is the largest and most populous city in the metropolitan area of Gush Dan, with...
. The assassin, Yigal Amir
Yigal Amir
Yigal Amir is the Israeli assassin of Prime Minister of Israel Yitzhak Rabin. The assassination took place on November 4, 1995 at the conclusion of a rally in Tel Aviv. Amir is currently serving a life sentence for murder plus six years for injuring Rabin's bodyguard, Yoram Rubin, under...
, a far-right-wing religious Zionist
Religious Zionism
Religious Zionism is an ideology that combines Zionism and Jewish religious faith...
strenuously opposed Rabin's peace initiative and particularly the signing of the Oslo Accords.

The assassination of Israeli Prime Minister and defense minister Yitzhak Rabin
Yitzhak Rabin
' was an Israeli politician, statesman and general. He was the fifth Prime Minister of Israel, serving two terms in office, 1974–77 and 1992 until his assassination in 1995....
was the culmination of Israeli right-wing dissent over the Oslo Peace Process. Rabin, despite his extensive service in the Israeli military, was disparaged personally by right-wing conservatives and Likud leaders who perceived the Oslo peace process as an attempt to forfeit the occupied territories. Contrary to Likud’s accusations, Rabin was focused on the consolidation of Israeli settlements in the occupied territories. He planned to give the Palestinian Liberation Organization control of 90% of the West Bank’s Arab population, while retaining 70% of the land in the occupied territories. In a speech to the Knesset, Rabin promised that Israel would continue to have “total freedom of action in order to fulfill the security aims that touch upon the permanent solution.”

Nonetheless, hostility continued to mount against Rabin. Ultra-orthodox conservatives and Likud party leaders believed that withdrawing from any Jewish land was heresy. Rallies, organized partially by Likud, became increasingly extreme in tone. Likud
Likud
Likud is the major center-right political party in Israel. It was founded in 1973 by Menachem Begin in an alliance with several right-wing and liberal parties. Likud's victory in the 1977 elections was a major turning point in the country's political history, marking the first time the left had...
Leader (and future Prime Minister) Benjamin Netanyahu
Benjamin Netanyahu
Benjamin "Bibi" Netanyahu is the current Prime Minister of Israel. He serves also as the Chairman of the Likud Party, as a Knesset member, as the Health Minister of Israel, as the Pensioner Affairs Minister of Israel and as the Economic Strategy Minister of Israel.Netanyahu is the first and, to...
accused Rabin’s government of being “removed from Jewish tradition ... and Jewish values.” Netanyahu addressed protesters of the Oslo movement at rallies where posters portrayed Rabin in a Nazi SS uniform or being the target by in the cross-hairs of a sniper. Rabin accused Netanyahu of provoking violence, a charge which Netanyahu strenuously denied.

The assassin was Yigal Amir
Yigal Amir
Yigal Amir is the Israeli assassin of Prime Minister of Israel Yitzhak Rabin. The assassination took place on November 4, 1995 at the conclusion of a rally in Tel Aviv. Amir is currently serving a life sentence for murder plus six years for injuring Rabin's bodyguard, Yoram Rubin, under...
, a former Hesder
Hesder
Hesder is an Israeli yeshiva program which combines advanced Talmudic studies with military service in the Israel Defense Forces, usually within a Religious Zionist framework...
student and far-right law student at Bar-Ilan University
Bar-Ilan University
Bar-Ilan University is a university in Ramat Gan of the Tel Aviv District, Israel.Established in 1955, Bar Ilan is now Israel's second-largest academic institution. It has nearly 26,800 students and 1,350 faculty members...
. Amir had strenuously opposed Rabin's peace initiative, particularly the signing of the Oslo Accords, because he felt that an Israeli withdrawal from the West Bank would deny Jews their “biblical heritage which they had reclaimed by establishing settlements.” Amir had come to believe that Rabin was a din rodef, meaning a ‘pursuer’ who endangered Jewish lives. The concept of din rodef
Rodef
A rodef , in traditional Jewish law, is one who is "pursuing" another to murder him or her. According to Jewish law, such a person must be killed by any bystander after being warned to stop and refusing...
is a part of traditional Jewish law. Under din rodef, Amir would be justified in removing Rabin from being a threat to Jews in the territories.

According to Rabbi Arthur Waskow, Amir’s interpretation of Din Rodef is a gross distortion of Jewish law and tradition.

First of all, the law of the pursuer only applies to a spontaneous act, whereas Yigal Amir planned this assassination for two years. Secondly, the law of the pursuer is only intended to save a potential victim from imminent death. There is absolutely no proof that withdrawing from certain territories will directly lead to the death of any Jews. On the contrary, Prime Minister Rabin, over half the members of the Knesset, and over half the population of Israel believe exactly the opposite — that it will save Jewish lives. Lastly, this law does not refer to elected representatives, for if Yitzhak Rabin was really a pursuer, then so are all his followers and that would mean that Amir should have killed over half the population of Israel! In other words, even according to the law of the pursuer, this act was totally futile and senseless since the peace process will continue.

Yigal Amir had been under surveillance by the Israeli internal security service (Shin Bet), but the agent monitoring him had concluded that Amir posed no threat to the Prime Minister's life.

After the rally, Rabin walked down the city hall steps towards the open door of his car, at which time Amir fired three shots towards Rabin with a Beretta 84F
Beretta 80 Models
The Beretta Cheetah, also known by its original model name of "Series 81", is a line of compact blowback operated semi-automatic pistols designed and manufactured by Beretta of Italy...
.380 ACP
.380 ACP
The .380 ACP pistol cartridge is a rimless, straight-walled pistol cartridge developed by firearms designer John Browning. The cartridge headspaces on the mouth of the case. It was introduced in 1908 by Colt, and has been a popular self-defense cartridge ever since...
caliber
Caliber
In guns including firearms, caliber or calibre is the approximate internal diameter of the barrel in relation to the diameter of the projectile used in it....
semi-automatic pistol. He was immediately subdued by Rabin's bodyguards and arrested with the murder weapon. He also shot and slightly wounded Yoram Rubin, a security guard, with a third bullet that missed Rabin. Incidentally, Rubin was also a geography
Geography
Geography is the science that studies the lands, features, inhabitants, and phenomena of Earth. A literal translation would be "to describe or write about the Earth". The first person to use the word "geography" was Eratosthenes...
student at Bar-Ilan University at the time.

Rabin was rushed to nearby Ichilov Hospital at the Tel Aviv Sourasky Medical Center, where he died on the operating table from blood loss and a punctured lung within 40 minutes. Rabin's bureau chief, Eitan Haber
Eitan Haber
Eitan Haber is an Israeli journalist and publicist. He is known for his writing on military and security issues, and for his longtime association with the late Israeli Prime Minister Yitzhak Rabin.-Biography:...
, announced outside the gates of the hospital:

"The government of Israel announces in consternation, in great sadness, and in deep sorrow, the death of prime minister and minister of defense Yitzhak Rabin, who was murdered by an assassin, tonight in Tel Aviv. May his memory be blessed."

In Rabin's pocket was a blood-stained sheet of paper with the lyrics to the well-known Israeli song Shir Lashalom
Shir LaShalom
right|thumb|The blood-stained sheet of Shir LaShalom lyrics that Yitzhak Rabin was reading from at the time of his assassination.Shir LaShalom is a popular Israeli song that has come to be an anthem of the Israeli peace camp. The song was first written in 1969. The lyrics were by Yaakov Rotblit...
("Song for Peace"), which was sung at the rally and dwells on the impossibility of bringing a dead person back to life and, therefore, the need for peace.

The assassination
Assassination
To carry out an assassination is "to murder by a sudden and/or secret attack, often for political reasons." Alternatively, assassination may be defined as "the act of deliberately killing someone, especially a public figure, usually for hire or for political reasons."An assassination may be...
of Rabin was a shock to the Israeli public. Rallies and memorials took place near Kings of Israel Square—later renamed Rabin Square in his honor—as well as near Rabin's home, the Knesset
Knesset
The Knesset is the unicameral legislature of Israel, located in Givat Ram, Jerusalem.-Role in Israeli Government :The legislative branch of the Israeli government, the Knesset passes all laws, elects the President and Prime Minister , approves the cabinet, and supervises the work of the government...
building, and the home of the assassin. Many other street
Street
A street is a paved public thoroughfare in a built environment. It is a public parcel of land adjoining buildings in an urban context, on which people may freely assemble, interact, and move about. A street can be as simple as a level patch of dirt, but is more often paved with a hard, durable...
s and public buildings around the country were named for Rabin as well. 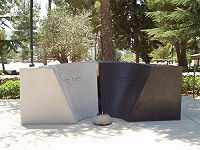 A national memorial day for Rabin is set on the date of his death according to the Hebrew calendar
Hebrew calendar
The Hebrew calendar , or Jewish calendar, is a lunisolar calendar used today predominantly for Jewish religious observances. It determines the dates for Jewish holidays and the appropriate public reading of Torah portions, yahrzeits , and daily Psalm reading, among many ceremonial uses...
.