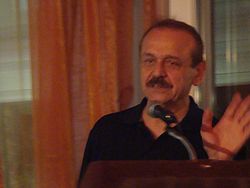 During the 1980s, Abd Rabbu moved closer to the position of Yassir Arafat, leader of the Palestine Liberation Organization
Palestine Liberation Organization
The Palestine Liberation Organization is a political and paramilitary organization which was created in 1964. It is recognized as the "sole legitimate representative of the Palestinian people" by the United Nations and over 100 states with which it holds diplomatic relations, and has enjoyed...
(PLO), and supported his attempts to negotiate a two-state solution
Two-state solution
The two-state solution to the Israeli-Palestinian conflict is the consensus solution that is currently under discussion by the key parties to the conflict, most recently at the Annapolis Conference in November 2007...
. This led to friction within the DFLP, and as Arafat gave his blessings to the Madrid Conference of 1991
Madrid Conference of 1991
The Madrid Conference was hosted by the government of Spain and co-sponsored by the USA and the USSR. It convened on October 30, 1991 and lasted for three days. It was an early attempt by the international community to start a peace process through negotiations involving Israel and the Palestinians...
, the organization split. Abd Rabbo, supported by Arafat, headed a faction mainly based in the West Bank
West Bank
The West Bank ) of the Jordan River is the landlocked geographical eastern part of the Palestinian territories located in Western Asia. To the west, north, and south, the West Bank shares borders with the state of Israel. To the east, across the Jordan River, lies the Hashemite Kingdom of Jordan...
, that backed these negotiations, and he became one of the Palestinian leader's main advisors; Hawatmeh's Syria
Syria
Syria , officially the Syrian Arab Republic , is a country in Western Asia, bordering Lebanon and the Mediterranean Sea to the West, Turkey to the north, Iraq to the east, Jordan to the south, and Israel to the southwest....
-based DFLP faction resisted the talks. The Abd Rabbo faction reformed as FIDA, the Palestine Democratic Union
Palestine Democratic Union
The Palestinian Democratic Union is a small Palestinian political party active in the Palestine Liberation Organization and the Palestinian National Authority .- Background :...
, dropping the Marxist-Leninist platform of the DFLP and rescinding armed struggle. Abd Rabbo became FIDA's representative on the PLO Executive Committee
PLO Executive Committee
The Executive Committee is the highest executive body of the Palestine Liberation Organization .Its 18 members are elected by the PLO Parliament, the Palestinian National Council , often as representatives of the PLO member factions...
. In 1993, however, Abd Rabbo left his post at the Madrid delegation in protest, when he discovered that Arafat had initiated another round of talks without informing him (these parallel negotiations eventually led to the 1993 Oslo Accords
Oslo Accords
The Oslo Accords, officially called the Declaration of Principles on Interim Self-Government Arrangements or Declaration of Principles , was an attempt to resolve the ongoing Palestinian-Israeli conflict...
.

After the signing of the Oslo Accords—which Abd Rabbo supported, the Madrid
Madrid
Madrid is the capital and largest city of Spain. The population of the city is roughly 3.3 million and the entire population of the Madrid metropolitan area is calculated to be 6.271 million. It is the third largest city in the European Union, after London and Berlin, and its metropolitan...
controversy notwithstanding—Abd Rabbo was permitted by Israel
Israel
The State of Israel is a parliamentary republic located in the Middle East, along the eastern shore of the Mediterranean Sea...
to return to the West Bank. He was a cabinet member for FIDA in several of Arafat's Palestinian National Authority
Palestinian National Authority
The Palestinian Authority is the administrative organization established to govern parts of the West Bank and Gaza Strip...
(PNA) governments, and served on several Palestinian diplomatic delegations during negotiations with Israel (including the failed Camp David 2000 Summit
Camp David 2000 Summit
The Middle East Peace Summit at Camp David of July 2000 took place between United States President Bill Clinton, Israeli Prime Minister Ehud Barak, and Palestinian Authority Chairman Yasser Arafat...
). On 9 June 2002 Abd Rabbo was appointed minister of information and culture in the PNA. He also presented several unofficial peace initiatives, widely believed to have had Arafat's blessing, such as the 2003 Geneva Accord
Geneva Accord
The Geneva Initiative, also known as the Geneva Accord, is a model permanent status agreement to end the Israeli-Palestinian conflict based on previous official negotiations, international resolutions, the Quartet Roadmap, the Clinton Parameters, and the Arab Peace Initiative...
. These initiatives, coupled with his public condemnations of suicide bombing attacks during the al-Aqsa Intifada
Al-Aqsa Intifada
The Second Intifada, also known as the Al-Aqsa Intifada and the Oslo War, was the second Palestinian uprising, a period of intensified Palestinian-Israeli violence, which began in late September 2000...
, strengthened Abd Rabbo's image as a pro-peace moderate, and he is often presented as a Palestinian "dove
Dove
Pigeons and doves constitute the bird family Columbidae within the order Columbiformes, which include some 300 species of near passerines. In general terms "dove" and "pigeon" are used somewhat interchangeably...
". However, after the Battle of Jenin
Battle of Jenin
The Battle of Jenin took place in the Jenin refugee camp in the West Bank. Israel Defense Forces entered the camp, and other areas under the administration of the Palestinian Authority, during the Second Intifada, as part of Operation Defensive Shield...
he accused Israel of digging mass graves for 900 Palestinians in the camp. This accusation, though widely circulated, has been dismissed as untrue by the United Nations and other human-rights organization.

In 2002, he resigned from FIDA after internal disputes. Women's rights
Women's rights
Women's rights are entitlements and freedoms claimed for women and girls of all ages in many societies.In some places these rights are institutionalized or supported by law, local custom, and behaviour, whereas in others they may be ignored or suppressed...
activist Zahira Kamal had been chosen in an internal election to replace him as minister in the government of the Palestinian National Authority
Palestinian National Authority
The Palestinian Authority is the administrative organization established to govern parts of the West Bank and Gaza Strip...
(PNA), but Abd Rabbo refused to step down, and instead left the party. He was able to remain in the cabinet as an independent, with Arafat's backing, but was replaced in FIDA by Saleh Ra'fat
Saleh Ra'fat
Saleh Ra'fat is a member of the Executive Committee of the Palestinian Liberation Organisation.-References:...
, its current Secretary-General.

After the death of Arafat, Abd Rabbo was removed from the post of minister in the PNA government by Arafat's successor, Mahmoud Abbas
Mahmoud Abbas
Mahmoud Abbas , also known by the kunya Abu Mazen , has been the Chairman of the Palestine Liberation Organisation since 11 November 2004 and became President of the Palestinian National Authority on 15 January 2005 on the Fatah ticket.Elected to serve until 9 January 2009, he unilaterally...
. Pending new elections, he remains on the Executive Committee of the PLO. He was one of the founders of the Third Way but failed to be elected in the 2006 elections
Palestinian legislative election, 2006
On January 25, 2006, elections were held for the Palestinian Legislative Council , the legislature of the Palestinian National Authority . Notwithstanding the 2005 municipal elections and the January 9, 2005 presidential election, this was the first election to the PLC since 1996; subsequent...
. He is now an advisor to Abbas.
The source of this article is wikipedia, the free encyclopedia.  The text of this article is licensed under the GFDL.