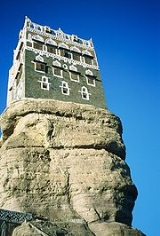 Encyclopedia
Yahya Muhammad Hamidaddin (or Imam Yahya) (1869—1948) became Imam
Imam
An imam is an Islamic leadership position, often the worship leader of a mosque and the Muslim community. Similar to spiritual leaders, the imam is the one who leads Islamic worship services. More often, the community turns to the mosque imam if they have a religious question...
of the Zaydis in 1904 and Imam of Yemen
Mutawakkilite Kingdom of Yemen
The Mutawakkilite Kingdom of Yemen , sometimes spelled Mutawakelite Kingdom of Yemen, also known as the Kingdom of Yemen or as North Yemen, was a country from 1918 to 1962 in the northern part of what is now Yemen...
in 1918. His name in full was Amir al-Mumenin al-Mutawakkil 'Ala Allah Rab ul-Alamin Imam Yahya bin al-Mansur Bi'llah Muhammad Hamidaddin, Imam and Commander of the Faithful.

Yahya Muhammad Hamidaddin was born on Friday 18 June 1869 in Sanaa into the Hamidaddin branch of the al-Qasimi dynasty. Upon the death of his father in 1904, Yahya became Imam
Imam
An imam is an Islamic leadership position, often the worship leader of a mosque and the Muslim community. Similar to spiritual leaders, the imam is the one who leads Islamic worship services. More often, the community turns to the mosque imam if they have a religious question...
, effectively ruler over the mountainous areas of the future North Yemen
North Yemen
North Yemen is a term currently used to designate the Yemen Arab Republic , its predecessor, the Mutawakkilite Kingdom of Yemen , and their predecessors that exercised sovereignty over the territory that is now the north-western part of the state of Yemen in southern Arabia.Neither state ever...
. However, the Ottomans who made claim on the area did not recognize the rule of the Imams of Yemen since their entry into Yemen.

His Qurayshi descent and vast canonical knowledge also meant he was proposed as a khalifa by the Islamic scholar Mohammad Rashid Rida following the abolition of the Caliphate in Turkey.

Sir Gilbert Clayton
Gilbert Clayton
Brigadier-General Sir Gilbert Falkingham Clayton, KCMG, KBE, CB , was a British army intelligence officer and colonial administrator, who worked in several countries in the Middle East in the early 20th century. In Egypt, during World War I as an intelligence officer, he supervised those who worked...
, who visited Imam Yahya in Sanaa in an earnest attempt to win him over in 1925 and during his short stay in the capital, was impressed by this ruler's administration, his military preparedness, and organization.

LtCol. Harold Jacob, C.S.I. describing him said; "Imam Yahya is a strong ruler. His sanctity as High Priest of the Zaidi sect and his descent from the Prophet's family adds to the prestige which his benign rule has won. His methods are patriarchal and humane. His one hobby is the Yemen"

Jewish chronicles lavish praise upon him and depict him as the champion of justice and compassion. This is, however, not surprising. Imam Yahia managed to put and end to the state of anarchy, lawlessness and violence which had lacerated the country and inflicted immense suffering upon its inhabitants , including the Jews. During his long reign the Jews enjoyed relatively favorable conditions and were generally in favour of the Imam.

Prior to the outbreak of World War I
World War I
World War I , which was predominantly called the World War or the Great War from its occurrence until 1939, and the First World War or World War I thereafter, was a major war centred in Europe that began on 28 July 1914 and lasted until 11 November 1918...
he signed the famous Treaty of Daan
Treaty of Daan
The Treaty of Daan was a 1913 agreement by the Ottoman government to recognise the Zaydi Imam as the spiritual and temporal leader of the Zaydi Shi'a in Yemen...
with the Ottomans in 1913. The treaty allowed for his rule over the Zaydi controlled portions of Yemen to be recognized.

Following the end of World War I and the demise of the Ottoman Empire and upon the news reaching Yemen on Thursday 14 November 1918 through an Ottoman envoy led by Mahmoud Nadim Bey and Ahmad Tawfiq, Imam Yahya entered Sanaa three days later on Sunday 17 November 1918. He entered in the company of many tribal leaders from Hashid, Arhab, Nihm, and Khowlan. He arrived at the residence of the Judge and Scholar Hussein bin Ali Al Amri and received dignitaries, scholars, Turkish princes, judges, and a flood of subjects who came to proclaim him the supreme ruler of all of Yemen.

His first order of the day was to forbid entering the capital Sanaa with arms, and appointed sentries at the gates to start a reign of peace and justice unparalleled during the years his rule. City after city accepted the rule and authority of Imam Yahya; the port of Mocha, and the city of Taiz were amongst the first most important cities. He took steps to create a modern state, and maintained all Ottoman officials who would stay to support the development of government.

Due to conflicting tribes in the border areas between Saudi Arabia, and Yemen that escalated a war ensued that was ended in 1934 in the signing of the Taif treat between Saudi Arabia and Yemen. The treaty was the basis for the final territorial agreement between both countries concluded during the reign of King Fahd bin Abdulaziz, and President Ali Saleh.

Imam Yahya was assassinated on the 17th of February 1948. The assassin, known as Al-Qardaei, was from the Bani Murad tribe.

Upon the knowledge of the murder of Imam Yahya, Yemeni tribes rallied behind Sayf-ul-Islam Ahmad bin Yahya and accepted him as the new Imam of Yemen. The armies surrounded Sanaa under the leadership of Seif Ul Islam Alhassan and Seif Ul Islam Alabbass both sons of the late Imam supported by their brother Seif Ul Islam Yahya from within the city walls.

The news shocked both the Arab League, and all Muslim governments. King Abdullah of Jordan compared his death to that of the third Khalifah Othman.

Both King Abdulaziz Ibn Saud of Saudi Arabia, and himself supported Imam Ahmad, and were first to declare him as the new Head of State.

Yemen was a founding member of the Arab League in 1945, and later joined the United Nations in 1947.

In 1946 British opposition to Imam Yahya's was led from Aden-based political parties.