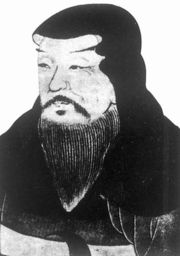 Xǔ Shèn was a Chinese
China
Chinese civilization may refer to:* China for more general discussion of the country.* Chinese culture* Greater China, the transnational community of ethnic Chinese.* History of China* Sinosphere, the area historically affected by Chinese culture...
philologist of the Han Dynasty
Han Dynasty
The Han Dynasty was the second imperial dynasty of China, preceded by the Qin Dynasty and succeeded by the Three Kingdoms . It was founded by the rebel leader Liu Bang, known posthumously as Emperor Gaozu of Han. It was briefly interrupted by the Xin Dynasty of the former regent Wang Mang...
. He was the author of Shuowen Jiezi
Shuowen Jiezi
The Shuōwén Jiězì was an early 2nd century CE Chinese dictionary from the Han Dynasty. Although not the first comprehensive Chinese character dictionary , it was still the first to analyze the structure of the characters and to give the rationale behind them , as well as the first to use the...
, the first Chinese dictionary
Chinese dictionary
Chinese dictionaries date back over two millennia to the Eastern Zhou Dynasty, which is a significantly longer lexicographical history than any other language. There are hundreds of dictionaries for Chinese, and this article will introduce some of the most important...
with character
Chinese character
Chinese characters are logograms used in the writing of Chinese and Japanese , less frequently Korean , formerly Vietnamese , or other languages...
analysis, as well as the first to organize the characters by shared components. It contains over 9,000 character entries under 540 radicals, explaining the origins of the characters based primarily upon a study of the earlier seal script
Seal script
Seal script is an ancient style of Chinese calligraphy. It evolved organically out of the Zhōu dynasty script , arising in the Warring State of Qin...
. A number of Xu Shen's character analyses are erroneous, as the seal script differs considerably from the older bronzeware script
Bronzeware script
Chinese Bronze inscriptions are writing in a variety of Chinese scripts on Chinese bronze artifacts such as zhōng bells and dǐng tripodal cauldrons from the Shāng dynasty to the Zhōu dynasty and even later...
and the even older oracle bone script
Oracle bone script
Oracle bone script refers to incised ancient Chinese characters found on oracle bones, which are animal bones or turtle shells used in divination in Bronze Age China...
, both of which were unknown at the time, also to Xu Shen. Xu Shen completed his dictionary in 100 CE but, for political reasons, waited until 121 CE before having the work presented to the Emperor An of Han
Emperor An of Han
Emperor Ān of Hàn, ch. 漢安帝, py. hàn ān dì, wg. Han An-ti, was an emperor of the Chinese Hàn Dynasty and the sixth emperor of the Eastern Hàn period ruling from 106 to 125...
China by his son.

A native of the present-day Yancheng District City of Luohe
Luohe
Luohe is a prefecture-level city in central Henan province, People's Republic of China. It is surrounded by the cities of Xuchang, Zhoukou, Zhumadian and Pingdingshan on its north, east, south and west respectively.-Administration:...
in Henan
Henan
Henan , is a province of the People's Republic of China, located in the central part of the country. Its one-character abbreviation is "豫" , named after Yuzhou , a Han Dynasty state that included parts of Henan...
Province, Xu Shen was a renowned Confucianist scholar who specialized in the Five Classics, and wrote the Wujing yiyi ( "Differing Meanings in the Five Classics"). Although the original text was partially lost or corrupted by the Tang Dynasty
Tang Dynasty
The Tang Dynasty was an imperial dynasty of China preceded by the Sui Dynasty and followed by the Five Dynasties and Ten Kingdoms Period. It was founded by the Li family, who seized power during the decline and collapse of the Sui Empire...
, the Qing Dynasty
Qing Dynasty
The Qing Dynasty was the last dynasty of China, ruling from 1644 to 1912 with a brief, abortive restoration in 1917. It was preceded by the Ming Dynasty and followed by the Republic of China....
scholar Chen Shouqi partially reconstructed the work from fragments and quotations.