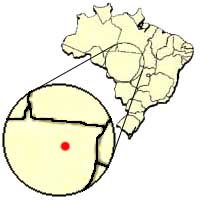 The Parque Nacional Xingu
Xingu peoples
Xingui peoples are indigenous peoples of Brazil living near the Xingu River. They have many cultural similarities despite their different ethnologies...
is located in the state of Mato Grosso
Mato Grosso
Mato Grosso is one of the states of Brazil, the third largest in area, located in the western part of the country.Neighboring states are Rondônia, Amazonas, Pará, Tocantins, Goiás and Mato Grosso do Sul. It also borders Bolivia to the southwest...
, Brazil
Brazil
Brazil , officially the Federative Republic of Brazil , is the largest country in South America. It is the world's fifth largest country, both by geographical area and by population with over 192 million people...
and was created on April 14, 1961, signed by President Jânio Quadros
Jânio Quadros
Jânio da Silva Quadros , , was a Brazilian politician who served as President of Brazil for only 7 months in 1961.-Career:...
. The area of the park is 2,642,003 ha.(26,420 km²), and it is contained in the municipalities of Mato Grosso; Canarana, Paranatinga, São Félix do Araguaia, São José do Xingu, Gaúcha do Norte, Feliz Natal, Querência, União do Sul, Nova Ubiratã and Marcelândia. 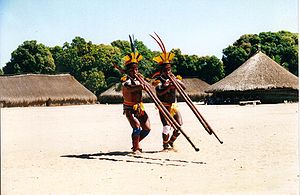 The National Park created with the twin objectives of protecting the environment and the indigenous populations of the area.

Part of the intrigue of the Xingu area is the drama associated with early-20th century exploration by Europeans, among whom perhaps Percy Harrison Fawcett is most notable. He sought out a city rumored since early 16th century European contact. David Grann
David Grann
David Grann is an American literary journalist and best-selling author. He has written about a range of subjects, from New York City's antiquated water supply system to the hunt for giant squid to the U.S...
's book, The Lost City of Z
The Lost City of Z (book)
The Lost City of Z: A Tale of Deadly Obsession in the Amazon is a non-fiction book by American author David Grann. It tells the story of the legendary British explorer Percy Fawcett who, in 1925, disappeared with his son in the Amazon while looking for an ancient lost city. For decades, explorers...
documents not only those early explorations, but more recent findings supporting the concept of large-scale civilizations pre-dating Spanish and Portuguese contacts.
The source of this article is wikipedia, the free encyclopedia.  The text of this article is licensed under the GFDL.