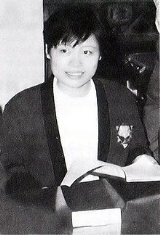 In 1991, Xie became China's second Grandmaster, after Ye Rongguang
Ye Rongguang
Ye Rongguang is a retired Chinese chess Grandmaster, who in 1990, became the first ever Chinese player to gain the Grandmaster title. He was for more than ten years the coach of women's world chess champion Zhu Chen...
. Xie Jun is married to her former coach GM Wu Shaobin
Wu Shaobin
Wu Shaobin is a Singaporean Grandmaster chess player. He won the national Singaporean Chess Championship in 2003 and 2005. He is married to former Women's World Chess Champion Xie Jun....
.

At the age of six Xie began to play Chinese chess, and by the age of 10 she had become the girls' Xiangqi
Xiangqi
Xiangqi is a two-player Chinese board game in the same family as Western chess, chaturanga, shogi, Indian chess and janggi. The present-day form of Xiangqi originated in China and is therefore commonly called Chinese chess in English. Xiangqi is one of the most popular board games in China...
champion of Beijing. At the urging of government authorities, she soon began playing international chess. Despite indifferent training opportunities, Xie became the Chinese girls' chess champion in 1984. In 1988 she tied for second–fourth places at the women's world junior championship.

At the age of 20 Xie won the right to challenge for the women's world title, and in 1991 she defeated Maya Chiburdanidze of Georgia, who had held the title since 1978, by a score of 8½–6½. In 1993 she successfully defended her title against Nana Ioseliani
Nana Ioseliani
Nana Mikhailovna Ioseliani is a Georgian woman chess player. She has held the FIDE Woman Grandmaster title since 1980, and the International Master title since 1993....
(winning the match 8½–2½). She lost the title to Susan Polgar
Susan Polgar
Susan Polgar is a Hungarian-American chess Grandmaster...
of Hungary in 1996 (8½–4½) but regained the title in 1999 by defeating another championship finalist, Alisa Galliamova
Alisa Galliamova
Alisa Galliamova is a Russian chess player, who was born to Russian father and Tatar mother. She holds the FIDE titles Woman Grandmaster and International Master. In 1988 she won the World Junior Girls Chess Championship...
(8½–6½), after Polgar refused to accept match conditions and forfeited her title. In 2000, FIDE
Fédération Internationale des Échecs
The Fédération Internationale des Échecs or World Chess Federation is an international organization that connects the various national chess federations around the world and acts as the governing body of international chess competition. It is usually referred to as FIDE , its French acronym.FIDE...
changed the format of the world championship to a knock-out system, and Xie won the title again, beating fellow Chinese player Qin Kanying
Qin Kanying
Qin Kanying is a Chinese chess player. She is a FIDE Woman Grandmaster. She is married to GM Peng Xiaomin, who is also her trainer. She won the Chinese Chess Championship five times: in 1988, 1991, 1995, 1999 and 2004.-External links:...
2½–1½ in the final.

In Guangzhou
Guangzhou
Guangzhou , known historically as Canton or Kwangchow, is the capital and largest city of the Guangdong province in the People's Republic of China. Located in southern China on the Pearl River, about north-northwest of Hong Kong, Guangzhou is a key national transportation hub and trading port...
in April 2000, Women's Champion Xie played a match with former World Champion Anatoly Karpov
Anatoly Karpov
Anatoly Yevgenyevich Karpov is a Russian chess grandmaster and former World Champion. He was the official world champion from 1975 to 1985 when he was defeated by Garry Kasparov. He played three matches against Kasparov for the title from 1986 to 1990, before becoming FIDE World Champion once...
.
Billed as a "female vs. male chess contest", the match consisted of four games at normal time controls and two rapid games. The four-game portion was won by Karpov 2½–1½ (1 win, 3 draws), and the rapid-play portion also went to Karpov, 1½–½ (1 win, 1 draw).

A hero in China, Xie became widely known for her optimism and vivid attacking style. Her success did much to popularize international chess in her country
People's Republic of China
China , officially the People's Republic of China , is the most populous country in the world, with over 1.3 billion citizens. Located in East Asia, the country covers approximately 9.6 million square kilometres...
and the rest of Asia. Xie Jun proved to be the first of a number of strong Chinese women players, the others being Zhu Chen
Zhu Chen
Zhu Chen is a chess Grandmaster. In 2001, she became China's second women's world chess champion after Xie Jun, and China's 13th Grandmaster.She today plays for Qatar.-Biography:...
, Xu Yuhua, and Wang Lei
Wang Lei (chess player)
Wang Lei is a Chinese chess Woman Grandmaster. She was in the FIDE Top 50 Women rating list from 2000 to 2003. Her highest position was 5th in the world on October 2001. Her peak rating was 2512 in October 2001...
. She was also an important factor in the Chinese women's team winning the gold medal at the 1998 Chess Olympiad
Chess Olympiad
The Chess Olympiad is a biennial chess tournament in which teams from all over the world compete against each other. The event is organised by FIDE, which selects the host nation.-Birth of the Olympiad:The first Olympiad was unofficial...
in Elista
Elista
-Twin towns/sister cities:Elista is twinned with the following sister cities. Howell, New Jersey, United States Lhasa, Tibet, China. Ulan-Ude, Buryat Republic, Russia-See also:*Geden Sheddup Choikorling Monastery*Burkhan Bakshin Altan Sume-External links:...
in Kalmykia
Kalmykia
The Republic of Kalmykia is a federal subject of Russia . Population: It is the only Buddhist region in Europe. It has also become well-known as an international chess mecca because its former President, Kirsan Ilyumzhinov, is the head of the International Chess Federation .-Geography:*Area:...
, Russia.

Among women, Xie has been the number 2 or number 3 highest rated woman for much of her career. Judit Polgár
Judit Polgár
Judit Polgár is a Hungarian chess grandmaster. She is by far the strongest female chess player in history. In 1991, Polgár achieved the title of Grandmaster at the age of 15 years and 4 months, the youngest person ever to do so at that time.Polgár was ranked No...
, the top-ranked woman, does not play women-only chess events.

— is an annotated collection of many of the world champion's games along with some biographical information.— contains a collection of interviews with many notable chess players.