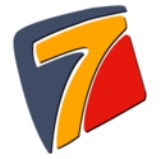 Encyclopedia
XHIMT is the callsign for the over the air Azteca 7
Azteca 7
Azteca 7 or El 7 is a network owned by TV Azteca, with affiliate stations all over Mexico all of which are owned and operated by TV Azteca. Azteca 7 uses Mexico, Distrito Federal's XHIMT as its flagship station and its channel as part of its name. Azteca 7's programming is available in HD and is...
(also known as El 7) network flagship station in Mexico City (Channel 7 analog and Channel 24 digital). XHIMT provides some HD programming to cable and satellite viewers.