The XCOR EZ-Rocket is a test platform for the XCOR rocket propulsion system. The plane is a modified Rutan Long-EZ
Rutan Long-EZ
-See also:-External links:****...
, with the propeller replaced by first one, then a pair of pressure-fed regeneratively cooled liquid-fuelled rocket engines and an underslung rocket-fuel tank. The engines are restartable in flight, and are contained within Kevlar
Kevlar
Kevlar is the registered trademark for a para-aramid synthetic fiber, related to other aramids such as Nomex and Technora. Developed at DuPont in 1965, this high strength material was first commercially used in the early 1970s as a replacement for steel in racing tires...
armour shielding for safety reasons. The EZ-Rocket is registered as an experimental aircraft
Experimental aircraft
An experimental aircraft is an aircraft that has not yet been fully proven in flight. Often, this implies that new aerospace technologies are being tested on the aircraft, though the label is more broad....
.

First flight took place on July 21, 2001, flown by test pilot
Test pilot
A test pilot is an aviator who flies new and modified aircraft in specific maneuvers, known as flight test techniques or FTTs, allowing the results to be measured and the design to be evaluated....
Dick Rutan
Dick Rutan
Richard Glenn "Dick" Rutan is an aviator who piloted the Voyager aircraft around the world non-stop with co-pilot Jeana Yeager...
.

On a typical flight, the EZ-Rocket takes off on rockets, gains altitude for a minute or so, then switches off the rockets and glides to a 'dead stick' landing.

The vehicle actually flies better during 'dead stick'/glide landings than a Long-EZ due to lack of drag from a stationary pusher
Pusher configuration
In a craft with a pusher configuration the propeller are mounted behind their respective engine. According to Bill Gunston, a "pusher propeller" is one mounted behind engine so that drive shaft is in compression...
prop — the vehicle's aerodynamics are 'cleaner', in spite of its belly tank. It is also lighter due to the lack of a piston engine (the rocket propulsion system is significantly lighter), so enjoys significantly lower wing loading
Wing loading
In aerodynamics, wing loading is the loaded weight of the aircraft divided by the area of the wing. The faster an aircraft flies, the more lift is produced by each unit area of wing, so a smaller wing can carry the same weight in level flight, operating at a higher wing loading. Correspondingly,...
than a stock Long-EZ.

XCOR registered it as a conventional aircraft, rather than a suborbital. The vehicle does not meet the current definition of suborbital (but the vehicle pre-dated the definition anyway.)

The Rocket Racing League
Rocket Racing League
The Rocket Racing League is a proposed racing league that would use rocket-powered aircraft to race a closed-circuit air racetrack. Founded in 2005, the league is currently working to hold the first multi-vehicle races in 2011...
aircraft currently in development, the Mark-III X-racer is a design descendant of the EZ-Rocket aircraft. Although XCOR is not the developer of the rocket engine for the Mark-III, XCOR did develop the rocket engine for the Mark-I X-Racer, the first of the X-Racers to use use a single rocket engine on a Velocity SE
Velocity SE
The Velocity SE is the entry level canard pusher aircraft from Velocity Aircraft.The four seat, rear engine aircraft may be powered by a Lycoming IO-320 or a Lycoming IO-360 engine.- See also :* Velocity XL* Rutan Long-EZ...
basic airframe, and the first X-Racer to utilize kerosene
RP-1
RP-1 is a highly refined form of kerosene outwardly similar to jet fuel, used as a rocket fuel. Although having a lower specific impulse than liquid hydrogen , RP-1 is cheaper, can be stored at room temperature, is far less of an explosive hazard and is far denser...
instead of isopropyl alcohol
Isopropyl alcohol
Isopropyl alcohol is a common name for a chemical compound with the molecular formula C3H8O. It is a colorless, flammable chemical compound with a strong odor...
fuel. XCOR used both design and operational experience from the EZ-Rocket in the Mark-I rocket aircraft design. 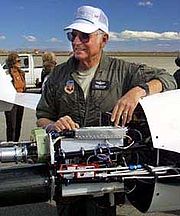