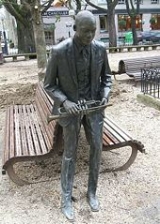 Overview
Wynton Learson Marsalis (born October 18, 1961) is a trumpeter, composer
Composer
A composer is a person who creates music, either by musical notation or oral tradition, for interpretation and performance, or through direct manipulation of sonic material through electronic media...
, bandleader
Bandleader
A bandleader is the leader of a band of musicians. The term is most commonly, though not exclusively, used with a group that plays popular music as a small combo or a big band, such as one which plays jazz, blues, rhythm and blues or rock and roll music....
, music educator, and Artistic Director of Jazz at Lincoln Center
Jazz at Lincoln Center
Jazz at Lincoln Center is part of Lincoln Center for the Performing Arts. JALC's performing arts complex, Frederick P. Rose Hall, is located at West 60th Street and Broadway in New York City, slightly south of the main Lincoln Center campus and directly adjacent to Columbus Circle. Frederick P....
. Marsalis has promoted the appreciation of classical and jazz music often to young audiences. Marsalis has been awarded nine Grammys in both genres, and a jazz recording of his was the first of its kind to win the Pulitzer Prize for Music
Pulitzer Prize for Music
The Pulitzer Prize for Music was first awarded in 1943. Joseph Pulitzer did not call for such a prize in his will, but had arranged for a music scholarship to be awarded each year...
.

I had a trumpet, but I didn't want to be a trumpet player. I wanted to be some type of athlete or in some type of scholarly activity, be a chemist or something&mdash;I had my little chemistry set, and I like playing with it.

Flexibility is an essential part of Jazz. It's what gives Jazz music the ability to combine with all other types of music and not lose its identity.

I think that virtuosity is the first sign of morality in a musician. It means you're serious enough to practice.