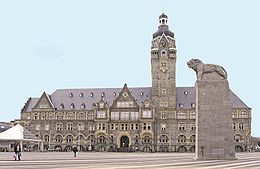 Remscheid (ˈʁɛmʃaɪt) is a city in North Rhine-Westphalia
North Rhine-Westphalia
North Rhine-Westphalia is the most populous state of Germany, with four of the country's ten largest cities. The state was formed in 1946 as a merger of the northern Rhineland and Westphalia, both formerly part of Prussia. Its capital is Düsseldorf. The state is currently run by a coalition of the...
, Germany
Germany
Germany , officially the Federal Republic of Germany , is a federal parliamentary republic in Europe. The country consists of 16 states while the capital and largest city is Berlin. Germany covers an area of 357,021 km2 and has a largely temperate seasonal climate...
. It is, after Wuppertal
Wuppertal
Wuppertal is a city in North Rhine-Westphalia, Germany. It is located in and around the Wupper river valley, and is situated east of the city of Düsseldorf and south of the Ruhr area. With a population of approximately 350,000, it is the largest city in the Bergisches Land...
and Solingen
Solingen
Solingen is a city in North Rhine-Westphalia, Germany. It is located on the northern edge of the region called Bergisches Land, south of the Ruhr area, and with a 2009 population of 161,366 is the second largest city in the Bergisches Land...
, the third largest municipality in Bergisches Land
Bergisches Land
The Bergisches Land is a low mountain range region within the state of Nordrhein-Westfalen, Germany, east of Rhine river, south of the Ruhr. The landscape is shaped by woods, meadows, rivers and creeks and contains over 20 artificial lakes...
, being located on the northern edge of the region, on south side of the Ruhr area
Ruhr Area
The Ruhr, by German-speaking geographers and historians more accurately called Ruhr district or Ruhr region , is an urban area in North Rhine-Westphalia, Germany. With 4435 km² and a population of some 5.2 million , it is the largest urban agglomeration in Germany...
.

Remscheid was founded in the 12th century, but remained a small village until the 19th century. Early spellings for the city included Remissgeid (1217), Rymscheyd (1351), Reymscheyd (1487) and Rembscheid (1639). The economic growth of the entire Rhine-Ruhr region led to an increase of the population of Remscheid. Mechanical engineering
Mechanical engineering
Mechanical engineering is a discipline of engineering that applies the principles of physics and materials science for analysis, design, manufacturing, and maintenance of mechanical systems. It is the branch of engineering that involves the production and usage of heat and mechanical power for the...
and toolmaking were the main industries practised within the town. This is carried on today with the Hazet tool company which has two factories in Remscheid. Remscheid was part of the Prussia
Prussia
Prussia was a German kingdom and historic state originating out of the Duchy of Prussia and the Margraviate of Brandenburg. For centuries, the House of Hohenzollern ruled Prussia, successfully expanding its size by way of an unusually well-organized and effective army. Prussia shaped the history...
n Rhine Province
Rhine Province
The Rhine Province , also known as Rhenish Prussia or synonymous to the Rhineland , was the westernmost province of the Kingdom of Prussia and the Free State of Prussia, within the German Reich, from 1822-1946. It was created from the provinces of the Lower Rhine and Jülich-Cleves-Berg...
from 1822-1945.

On 31 July 1943, during the second World War
World War II
World War II, or the Second World War , was a global conflict lasting from 1939 to 1945, involving most of the world's nations—including all of the great powers—eventually forming two opposing military alliances: the Allies and the Axis...
, Remscheid was almost completely destroyed during a British bombing raid which caused a firestorm
Firestorm
A firestorm is a conflagration which attains such intensity that it creates and sustains its own wind system. It is most commonly a natural phenomenon, created during some of the largest bushfires, forest fires, and wildfires...
.

An A-10 Thunderbolt II
A-10 Thunderbolt II
The Fairchild Republic A-10 Thunderbolt II is an American single-seat, twin-engine, straight-wing jet aircraft developed by Fairchild-Republic in the early 1970s. The A-10 was designed for a United States Air Force requirement to provide close air support for ground forces by attacking tanks,...
crashed in the city on 8 December 1988. Six people died.