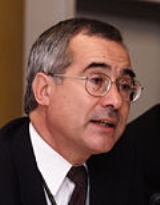 Encyclopedia
The World Bank
World Bank
The World Bank is an international financial institution that provides loans to developing countries for capital programmes.The World Bank's official goal is the reduction of poverty...
Chief Economist
Chief economist
The Chief Economist is a single position job class having primary responsibility for the development, coordination, and production of economic and financial analysis...
(full title: Senior Vice President, Development Economics, and Chief Economist) provides intellectual leadership and direction to the Bank’s overall development
International development
International development or global development is a concept that lacks a universally accepted definition, but it is most used in a holistic and multi-disciplinary context of human development — the development of greater quality of life for humans...
strategy and economic research agenda, at global, regional and country levels. As a member of the Bank’s senior management
Senior management
Senior management, executive management, or management team is generally a team of individuals at the highest level of organizational management who have the day-to-day responsibilities of managing a company or corporation, they hold specific executive powers conferred onto them with and by...
team the person advises the President and Bank’s management on economic issues.