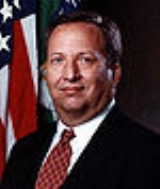 Overview
Lawrence Henry Summers is an American economist
Economist
An economist is a professional in the social science discipline of economics. The individual may also study, develop, and apply theories and concepts from economics and write about economic policy...
. He served as the 71st United States Secretary of the Treasury
United States Secretary of the Treasury
The Secretary of the Treasury of the United States is the head of the United States Department of the Treasury, which is concerned with financial and monetary matters, and, until 2003, also with some issues of national security and defense. This position in the Federal Government of the United...
from 1999 to 2001 under President Bill Clinton
Bill Clinton
William Jefferson "Bill" Clinton is an American politician who served as the 42nd President of the United States from 1993 to 2001. Inaugurated at age 46, he was the third-youngest president. He took office at the end of the Cold War, and was the first president of the baby boomer generation...
. He was Director of the White House United States National Economic Council for President Barack Obama
Barack Obama
Barack Hussein Obama II is the 44th and current President of the United States. He is the first African American to hold the office. Obama previously served as a United States Senator from Illinois, from January 2005 until he resigned following his victory in the 2008 presidential election.Born in...
until November 2010.
Summers is the Charles W. Eliot University Professor at Harvard University
Harvard University
Harvard University is a private Ivy League university located in Cambridge, Massachusetts, United States, established in 1636 by the Massachusetts legislature. Harvard is the oldest institution of higher learning in the United States and the first corporation chartered in the country...
's Kennedy School of Government. He is the 1993 recipient of the John Bates Clark Medal
John Bates Clark Medal
The John Bates Clark Medal is awarded by the American Economic Association to "that American economist under the age of forty who is adjudged to have made a significant contribution to economic thought and knowledge"...
for his work in several fields of economics.

With uncertainty in oil markets, a buildup of speculative pressures and the large U.S. current account deficit, there is a real possibility that Paulson's crisis-management skills will be tested.

I know that there is one additional thing that I've learned and that is that what Harvard does and says has an enormous resonance that goes beyond Zip code 02138.

I deeply regret the impact of my comments and apologise for not having weighed them more carefully ... I was wrong to have spoken in a way that has resulted in an unintended signal of discouragement to talented girls and women.

We must recognise that in an integrated world, trade cannot be divorced from other concerns. We need to promote free trade and serious global efforts with respect to common problems even as we support every nation's right to chart its own course.

The situation in a number of countries reminds one that it's still a risky world out there in the emerging markets.

Where countries have been able to carry through on their reform commitments -- as in Korea, Thailand and the Philippines -- results are starting to come in the form of lower interest rates, new investment and increased growth.

No free country will ever again have anything like the 90 percent tax rates that we had in this country. Past a certain point, high marginal tax rates are, indeed, terribly destructive.

Takeovers wouldn't cause the stock market to rise unless there is an upward reassessment of earnings (potential). People are more optimistic and confident about the future.