An amount of labor

While a precise definition of a workload is elusive, a commonly accepted definition is the hypothetical relationship between a group or individual human operator and task demands.

The assessment of operator workload has a vital impact on the design
Design
Design as a noun informally refers to a plan or convention for the construction of an object or a system while “to design” refers to making this plan...
of new human-machine systems. By evaluating operator workload during the design of a new system
System
System is a set of interacting or interdependent components forming an integrated whole....
, or iteration
Iteration
Iteration means the act of repeating a process usually with the aim of approaching a desired goal or target or result. Each repetition of the process is also called an "iteration," and the results of one iteration are used as the starting point for the next iteration.-Mathematics:Iteration in...
of an existing system, problems such as workload bottleneck
Bottleneck
A bottleneck is a phenomenon where the performance or capacity of an entire system is limited by a single or limited number of components or resources. The term bottleneck is taken from the 'assets are water' metaphor. As water is poured out of a bottle, the rate of outflow is limited by the width...
s and overload
Overload
-Bands:* Overload * Overload * Overload -Albums:*Overload *Overload *Overload -Songs:*Overload , a dance song by Voodoo and Serano...
can be identified. As the human operator is a central part of a human-machine system, the correction of these problems is necessary for the operation of safe and efficient systems.

An operating budget
Operating budget
An operating budget is the annual budget of an activity stated in terms of Budget Classification Code, functional/subfunctional categories and cost accounts. It contains estimates of the total value of resources required for the performance of the operation including reimbursable work or services...
may include estimates of the expected workload for a specific activity. Work loads can vary in many different situations, but the average workload is average.

Workload can also refer to the total energy output of a system, particularly of a person or animal performing a strenuous task over time. One particular application of this is weight lifting
Powerlifting
Powerlifting is a strength sport. It resembles the sport of Olympic weightlifting, as both disciplines involve lifting weights in three attempts. Powerlifting evolved from a sport known as 'odd lifts' which followed the same three attempt format but used a wide variety of events akin to Strongman...
/weights training, where both anecotal evidence and scientific research has shown that it is the total "workload" that is important to muscle growth, as opposed to just the load, just the volume, or "time under tension". In these and related uses of the word, "workload" can be broken up into "work+load", referring to the work done with a given load. In terms of weights training, the "load" refers to the heaviness of the weight being lifted (20 kg is a greater load than 10 kg), and "work" refers to the volume, or total number of reps and sets done with that weight (20 reps is more work than 10 reps, but 2 sets of 10 reps is the same work as 1 set of 20 reps, its just that the human body cannot do 20reps of a heavy weight without a rest, so its best to think of 2x10 as being 20 reps, with a rest in the middle).

This theory was also used to determine horse power (hp), which was defined as the amount of work a horse could do with a given load over time. The wheel that the horse turned in Watt's original experiment put a certain load on the horse's muscles, and the horse could do a certain amount of work with this load in a minute. Provided the horse was a perfect machine, it would be capable of a constant maximum workload, so increasing the load by a given percentage would result in the possible work done decreasing by the same percentage, so that it would still equal "1 hp". However, horses are not perfect machines and over short time periods are capable of as much as 14 hp, and over long periods of exertion output an average of less than 1 hp.

The theory can also be applied to automobiles or other machines, which are slightly more "perfect" than animals, making a car heavier for instance, increases the load that the engine must pull, likewise making it more aerodynamic decreases drag, which acts as a load on the car as well. Torque can be thought of as the ability to move load, and the revs are how much work it can do with that load in a given amount of time. Therefore torque and revs together create kilowatts, or total power output, which can be related to the "workload" of the engine/car, or how much work it can do with a given amount of load. As engines are more mechanically perfect than animals' muscles, and do not fatigue in the same way, they will confirm much more closely to the formula that if you apply more load, they will do less work, and vice versa.

Another aspect to workload is the mathematical predictive models used in human factors analysis; generally to support the design and assessment of safety-critical systems.

There is no one agreed definition of workload and consequently not one agreed method of assessing or modelling it. One example definition by Hart and Staveland (1988) describes workload as "the perceived relationship between the amount of mental processing capability or resources and the amount required by the task". Workload modelling is the analytical technique used to measure and predict workload. The main objective of assessing and predicting workload is to achieve evenly distributed, manageable workload and to avoid overload or underload. 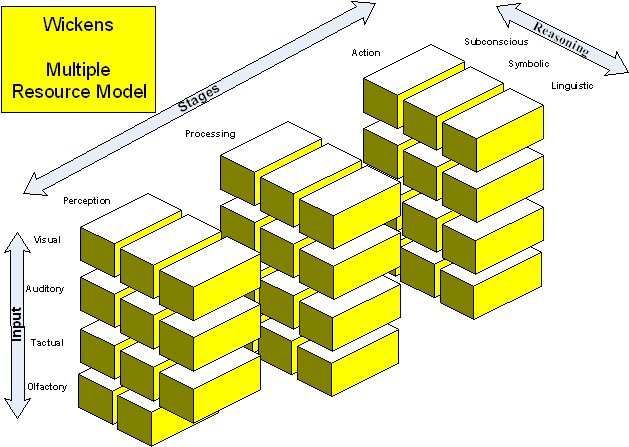 Wickens MRT proposes that the human operator does not have one single information processing source that can be tapped, but several different pools of resources that can be tapped simultaneously. Each box in figure 1 indicates one cognitive resource. Depending on the nature of the task, these resources may have to process information sequentially if the different tasks require the same pool of resources, or can be processed in parallel if the task requires different resources.

Wickens’ theory views performance decrement as a shortage of these different resources and describes humans as having limited capability for processing information. Cognitive resources are limited and a supply and demand problem occurs when the individual performs two or more tasks that require a single resource (as indicated by one box on the diagram). Excess workload caused by a task using the same resource can cause problems and result in errors or slower task performance. For example, if the task is to dial the phone then no excess demands are being placed on any one component. However, if another task is being performed at the same time that makes demands on the same component(s), the result may be excess workload.

McCracken and Aldrich (1984), like Wickens, describe processing not as one central resource but several processing resources: visual, cognitive, auditory, and psychomotor (VCAP). All tasks can be decomposed into these components.

They developed rating scales for each of the VCAP components, which provide a relative rating of the degree to which each resource component is used.

Joseph Hopkins (unpublished) developed a training methodology, where the background to his training theory is that complex skills are, in essence, resource conflicts where training has removed or reduced the conflicting workload demands, either by higher level processing or by predictive time sequencing. His work is in effect based on Gallwey (1974) and Morehouse (1977). The theory postulates that the training allows the different task functions to be integrated into one new skill. An example of this is learning to drive a car. Changing gear and steering are two conflicting tasks (i.e. both require the same resources) before they are integrated into the new skill of "driving". An experienced driver will not need to think about what to do when turning a corner (higher level processing) or alternatively may change gear earlier than required to give sufficient resources for steering round the corner (predictive time sequencing).

With any attempt at creating a workload model the process begins with understanding the tasks to be modelled. This is done by creating a task analysis that defines:

Each task must be defined to a sufficient level to allow realistic physical and mental workload values to be estimated and to determine which resources (or combination of resources) are required for each task – visual, auditory, cognitive and psychomotor. A numerical value can be assigned to each based on the scales developed by McCracken and Aldrich.

These numerical values against each type of resource are then entered into the workload model. The model sums the workload ratings within each resource and across concurrent tasks. The critical points within the task are therefore identified. When proposals are made for introducing new devices onto the current baseline activities the impact of this can then be compared to the baseline.
Possibly one of the most advanced workload models was developed by K Tara Smith (2007): this model integrated the theories of Wickens, McCracken and Aldrich and Hopkins to produce a model that not only predicts workload for an individual task but also indicates how that workload may change given the experience and training level of the individuals carrying out that task.
Workload assessment techniques are typically used to answer the following types of questions: Eisen, P.S and Hendy, K.C. (1987):
The source of this article is wikipedia, the free encyclopedia.  The text of this article is licensed under the GFDL.