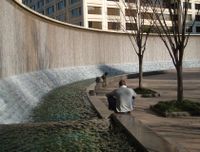 Woodruff Park, named for Robert W. Woodruff
Robert W. Woodruff
Robert Winship Woodruff was the president of The Coca-Cola Company from 1923 until 1954. With his enormous Coke fortune, he was also a major philanthropist, and many educational and cultural landmarks in the U.S...
, is located in the heart of downtown
Downtown
Downtown is a term primarily used in North America by English speakers to refer to a city's core or central business district ....
Atlanta, Georgia
Atlanta, Georgia
Atlanta is the capital and most populous city in the U.S. state of Georgia. According to the 2010 census, Atlanta's population is 420,003. Atlanta is the cultural and economic center of the Atlanta metropolitan area, which is home to 5,268,860 people and is the ninth largest metropolitan area in...
. The park's 6 acres (24,281.2 m²) are north of Edgewood Ave, between Peachtree Street NE and Park Place NE. The park includes two fountain
Fountain
A fountain is a piece of architecture which pours water into a basin or jets it into the air either to supply drinking water or for decorative or dramatic effect....
s, a performance pavilion
Pavilion (structure)
In architecture a pavilion has two main meanings.-Free-standing structure:Pavilion may refer to a free-standing structure sited a short distance from a main residence, whose architecture makes it an object of pleasure. Large or small, there is usually a connection with relaxation and pleasure in...
, and several monument
Monument
A monument is a type of structure either explicitly created to commemorate a person or important event or which has become important to a social group as a part of their remembrance of historic times or cultural heritage, or simply as an example of historic architecture...
s.

The original 4 acres (16,187.4 m²) between Peachtree, Edgewood, Pryor (now Park Place) and the Candler Building were purchased anonymously by Mr. Woodruff then donated to the city in 1971 and the first incarnation of the park opened in 1973.

A bronze sculpture
Sculpture
Sculpture is three-dimensional artwork created by shaping or combining hard materials—typically stone such as marble—or metal, glass, or wood. Softer materials can also be used, such as clay, textiles, plastics, polymers and softer metals...
, Atlanta from the Ashes (The Phoenix)
Atlanta from the Ashes (The Phoenix)
Atlanta from the Ashes, more commonly known as The Phoenix, is a bronze monument located in Atlanta, Georgia, United States, symbolizing Atlanta's rise from the ashes of the Civil War to become one of the most important cities in the world...
, depicts a woman releasing a phoenix
Phoenix (mythology)
The phoenix or phenix is a mythical sacred firebird that can be found in the mythologies of the Arabian, Persians, Greeks, Romans, Egyptians, Chinese, Indian and Phoenicians....
, a symbol of Atlanta's rise from the ashes after being burnt to the ground by William T. Sherman's Union armies during the Civil War
American Civil War
The American Civil War was a civil war fought in the United States of America. In response to the election of Abraham Lincoln as President of the United States, 11 southern slave states declared their secession from the United States and formed the Confederate States of America ; the other 25...
. Atlanta from the Ashes (The Phoenix) was a gift of the Rich Foundation in commemoration of the 100th anniversary of Rich's Department store
Rich's
Rich's was a department store retail chain, headquartered in Atlanta, Georgia, that operated in the southern U.S. from 1867 until March 6, 2005 when the nameplate was eliminated and replaced by Macy's...
. The sculpture was designed by James Seigler, sculpted by Gamba Quirino, and fabricated by Feruccia Vezzoni in 1969. Atlanta from the Ashes (The Phoenix) was originally located on a viaduct adjacent to the first Rich's Department store on Martin Luther King Jr. Drive, S.W. & Spring Street, S.W., Atlanta, Georgia from 1969 to 1995. In 1995, the sculpture was restored and moved to its current location in Woodruff Park.