Encyclopedia
Wolfenbüttel is a town in Lower Saxony
Lower Saxony
Lower Saxony is a German state situated in north-western Germany and is second in area and fourth in population among the sixteen states of Germany...
, Germany
Germany
Germany , officially the Federal Republic of Germany , is a federal parliamentary republic in Europe. The country consists of 16 states while the capital and largest city is Berlin. Germany covers an area of 357,021 km2 and has a largely temperate seasonal climate...
, located on the Oker
Oker
The Oker is a river in Lower Saxony, Germany, that has historically formed an important political boundary. It is a left tributary of the River Aller, in length and runs in a generally northerly direction.- Course :...
river about 13 kilometres south of Brunswick
Braunschweig
Braunschweig , is a city of 247,400 people, located in the federal-state of Lower Saxony, Germany. It is located north of the Harz mountains at the farthest navigable point of the Oker river, which connects to the North Sea via the rivers Aller and Weser....
. It is the seat of the District of (Landkreis) Wolfenbüttel
Wolfenbüttel (district)
Wolfenbüttel is a district in southeastern Lower Saxony, Germany. Neighboring districts are the district-free City of Braunschweig, the district of Helmstedt, the district of Harz in Saxony-Anhalt, and the districts of Goslar, Hildesheim and Peine...
and of the bishop of the Protestant Lutheran State Church of Brunswick. It is also the southernmost of the 172 towns in northern Germany whose names end in büttel, meaning "residence" or "settlement."

It is not known when Wolfenbüttel was founded, but it was first mentioned in 1118 as Wulferisbutle. The first settlement was probably restricted to a tiny islet in the Oker river.

Wolfenbüttel became the residence of the dukes of Brunswick in 1432. Over the following three centuries it grew to be a centre of the arts, and personages such as Michael Praetorius
Michael Praetorius
Michael Praetorius was a German composer, organist, and music theorist. He was one of the most versatile composers of his age, being particularly significant in the development of musical forms based on Protestant hymns, many of which reflect an effort to make better the relationship between...
, Johann Rosenmüller
Johann Rosenmüller
Johann Rosenmüller , was a German Baroque composer, who played a part in transmitting Italian musical styles to the north....
, Gottfried Leibniz
Gottfried Leibniz
Gottfried Wilhelm Leibniz was a German philosopher and mathematician. He wrote in different languages, primarily in Latin , French and German ....
, and Gotthold Ephraim Lessing lived there. The ducal court eventually returned to Braunschweig in 1753 and Wolfenbüttel subsequently lost in importance.

The Battle of Wolfenbüttel, part of the Thirty Years' War
Thirty Years' War
The Thirty Years' War was fought primarily in what is now Germany, and at various points involved most countries in Europe. It was one of the most destructive conflicts in European history....
, was fought here in June 1641, when the Swedes under Wrangel
Carl Gustaf Wrangel
Carl Gustaf Wrangel was a high-ranking Swedish noble, statesman and military commander in the Thirty Years', Torstenson, Bremen, Second Northern and Scanian Wars....
and the Count of Königsmark
Hans Christoff von Königsmarck
Count Hans Christoff von Königsmarck, of Tjust , son of Conrad von Königsmarck and Beatrix von Blumenthal, was a Swedish-German soldier who commanded Sweden's legendary flying column, a force which played a key role in Gustavus Adolphus' strategy...
defeated the Austrians under Archduke Leopold of Habsburg
Archduke Leopold Wilhelm of Austria
Archduke Leopold Wilhelm of Austria was an Austrian military commander, Governor of the Spanish Netherlands from 1647 to 1656, and a patron of the arts.-Biography:...
. 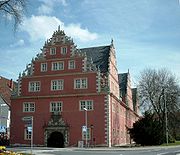 Today, Wolfenbüttel is smaller than the neighbouring cities of Braunschweig, Salzgitter, and Wolfsburg
Wolfsburg
Wolfsburg is a town in Lower Saxony, Germany. It is located on the River Aller northeast of Braunschweig , and is mainly notable as the headquarters of Volkswagen AG...
, but, because it was largely undamaged by the war, its downtown is rich in half-timber buildings, many dating several centuries back, and it still retains its historical character. Wolfenbüttel is located on the German Framework Road
German Framework Road
The German Timber-Frame Road is a German tourist route leading from the river Elbe in the north to Lake Constance in the south. Along the road you can find nearly 100 cities and towns with remarkable timber-framed houses...
.

Wolfenbüttel is home of several departments of the Ostfalia University of Applied Sciences and the Lessing-Akademie, an organisation for the study of Lessing's works. It is also home to the Niedersächsisches Staatsarchiv, the state archives of Lower Saxony.

The herb liqueur
Liqueur
A liqueur is an alcoholic beverage that has been flavored with fruit, herbs, nuts, spices, flowers, or cream and bottled with added sugar. Liqueurs are typically quite sweet; they are usually not aged for long but may have resting periods during their production to allow flavors to marry.The...
Jägermeister
Jägermeister
Jägermeister is a German 70-proof digestif made with 56 different herbs and spices. It is the flagship product of Mast-Jägermeister SE, headquartered in Wolfenbüttel, south of Braunschweig, Lower Saxony, Germany.- History :...
is distilled in Wolfenbüttel and the headquarters of Mast-Jägermeister is still located there.

Sèvres
Sèvres
Sèvres is a commune in the southwestern suburbs of Paris, France. It is located from the centre of Paris.The town is known for its porcelain manufacture, the Manufacture nationale de Sèvres, making the famous Sèvres porcelain, as well as being the location of the International Bureau of Weights...
, France
France
The French Republic , The French Republic , The French Republic , (commonly known as France , is a unitary semi-presidential republic in Western Europe with several overseas territories and islands located on other continents and in the Indian, Pacific, and Atlantic oceans. Metropolitan France...
Kenosha, Wisconsin
Wisconsin
Wisconsin is a U.S. state located in the north-central United States and is part of the Midwest. It is bordered by Minnesota to the west, Iowa to the southwest, Illinois to the south, Lake Michigan to the east, Michigan to the northeast, and Lake Superior to the north. Wisconsin's capital is...
, United States
United States
The United States of America is a federal constitutional republic comprising fifty states and a federal district...
Satu Mare, Romania
Romania
Romania is a country located at the crossroads of Central and Southeastern Europe, on the Lower Danube, within and outside the Carpathian arch, bordering on the Black Sea...
Kamienna Góra
Kamienna Góra
Kamienna Góra is a town in south-western Poland with 21,440 inhabitants . It is the seat of Kamienna Góra County, and also of the rural district called Gmina Kamienna Góra, although it is not part of the territory of the latter .Kamienna Góra on the Bóbr river is situated in Lower Silesian...
, Poland
Poland
Poland , officially the Republic of Poland , is a country in Central Europe bordered by Germany to the west; the Czech Republic and Slovakia to the south; Ukraine, Belarus and Lithuania to the east; and the Baltic Sea and Kaliningrad Oblast, a Russian exclave, to the north...