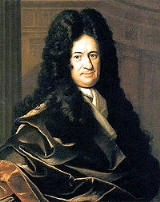 Overview
Gottfried Wilhelm Leibniz (sometimes von Leibniz) (ˈɡɔtfʁiːt ˈvɪlhɛlm fɔn ˈlaɪbnɪts or ˈlaɪpnɪts) (July 1, 1646 – November 14, 1716) was a German
Germans
The Germans are a Germanic ethnic group native to Central Europe. The English term Germans has referred to the German-speaking population of the Holy Roman Empire since the Late Middle Ages....
philosopher and mathematician
Mathematician
A mathematician is a person whose primary area of study is the field of mathematics. Mathematicians are concerned with quantity, structure, space, and change....
. He wrote in different languages, primarily in Latin
Latin
Latin is an Italic language originally spoken in Latium and Ancient Rome. It, along with most European languages, is a descendant of the ancient Proto-Indo-European language. Although it is considered a dead language, a number of scholars and members of the Christian clergy speak it fluently, and...
(~40%), French
French language
French is a Romance language spoken as a first language in France, the Romandy region in Switzerland, Wallonia and Brussels in Belgium, Monaco, the regions of Quebec and Acadia in Canada, and by various communities elsewhere. Second-language speakers of French are distributed throughout many parts...
(~30%) and German
German language
German is a West Germanic language, related to and classified alongside English and Dutch. With an estimated 90 – 98 million native speakers, German is one of the world's major languages and is the most widely-spoken first language in the European Union....
(~15%).

What were the principles of Leibniz's philosophical thought?

What were some of Leibniz's contributions to mathematics?

How did Leibniz contribute to the science of metaphysics?

What were some of Leibniz's contributions to science?
More

Everything that is possible demands to exist.
More
x