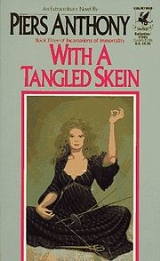 Niobe agrees to become one of the three aspects of the incarnation of Fate, in an attempt to thwart the plans of Satan.

Set around the time of World War I
World War I
World War I , which was predominantly called the World War or the Great War from its occurrence until 1939, and the First World War or World War I thereafter, was a major war centred in Europe that began on 28 July 1914 and lasted until 11 November 1918...
, a young Irish (around 21-23) woman named Niobe
Niobe
Niobe was a daughter of Tantalus and of either Dione, the most frequently cited, or of Eurythemista or Euryanassa, and she was the sister of Pelops and Broteas, all of whom figure in Greek mythology....
has a marriage arranged for her by her parents. Her husband-to-be is a teenage boy (16-17) named Cedric Kaftan. She considers him too immature for her, but can find no way out of the marriage. Although Niobe at first hates being married to a "child", Cedric's good nature, kind heartedness, and desire to make his wife happy and safe win her over, and she soon falls madly in love with her husband. Cedric shows that he is an intellectual prodigy. With some prodding and nurturing from his wife as well as from his mentor, Cedric accepts a scholarship to attend college and hone his magical abilities. As he matures and finds his niche in magic and wetland
Wetland
A wetland is an area of land whose soil is saturated with water either permanently or seasonally. Wetlands are categorised by their characteristic vegetation, which is adapted to these unique soil conditions....
studies, he and Niobe have a child: Cedric Jr. With a bright future certain, and wizardry greatness assured, life in the Kaftan house was happy indeed. Sadly a few years later, Cedric learns of a plot to kill Niobe. Seeing no way to avert it, Cedric leaves school, goes home to Niobe, hastily puts his affairs in order, and sets in motion the only way he can save his wife's life..... by taking her place. On the fateful morning, Cedric wakes up to make love to his wife one last time, kisses her goodbye and goes into the woods to face his destiny. Awakened by gunshots, Niobe learns her husband is assassinated as part of a plot by the agents of Satan. She learns not only of the plot, but that she, and not her husband, was the real target. Upon learning this, Niobe's hatred for having her husband's life cut short, makes her vow to make Satan pay.

She is invited to join the Incarnation(s) of Fate, three women sharing one physical body. Eager to thwart Satan's plans and to avenge Cedric, she leaves her child with Cedric's cousin and becomes Clotho, the youngest aspect of the three Fates. The three Fates weave the tapestry
Tapestry
Tapestry is a form of textile art, traditionally woven on a vertical loom, however it can also be woven on a floor loom as well. It is composed of two sets of interlaced threads, those running parallel to the length and those parallel to the width ; the warp threads are set up under tension on a...
of life and have disposition over the length of human lives and the pattern they produce. Clotho, the youngest, spins the threads from the substance of Void; Lachesis
Lachesis (mythology)
In Greek mythology, Lachesis was the second of the Three Fates, or Moirae, also known as the Triple Moon Goddesses or the Lunar Dieties. Each phase of the moon representing each of the fates - Clotho, Lachesis and Atropos...
, the middle aspect, measures the threads and Atropos
Atropos
Atropos or Aisa , in Greek mythology, was one of the three Moirae, goddesses of fate and destiny. Her Roman equivalent was Morta.Atropos or Aisa was the oldest of the Three Fates, and was known as the "inflexible" or "inevitable." It was Atropos who chose the mechanism of death and ended the life...
, the oldest, cuts the thread of each individual human. When she takes the aspect of Clotho, Niobe must journey to the edge of the Void without aid from the other Fates and replenish her stock of thread-material.

Because Incarnations do not age, Niobe spends many years as Clotho. She frequently visits her son, who has befriended Cedric's younger cousin, Pacian. Because her lack of aging would be noticed, she takes the form of the grandmotherly Atropos, pretending to be a concerned family friend. One day, the Fates take the two boys to a fortune teller, who gives them disturbing news—each of the boys will have a daughter who will oppose a tangle in the threads of life. However, one of the girls is fated to marry Death, and the other is fated to marry Evil.

Niobe leaves the office of Clotho and returns to mortal life in order to marry Pacian, who has matured while she was in office. She gives birth to a daughter they call Orb, at around the same time that her son, who is now a powerful magician, has a daughter called Luna. The two girls grow up together under the magician's protection. At one point the girls and Niobe go on a quest for powerful artifacts that will enhance their natural talents, and Satan takes the opportunity to send demons against them. Although one of the girls is to marry him, he is not interested in a wife who is not evil. Niobe helps the girls to get through safely, though, and Satan's plot comes to nothing.

One year after the events of On a Pale Horse, the middle-aged Niobe is asked to join the Incarnation of Fate once again, this time as Lachesis. Satan has arranged to have all three women leave the office at the same time, thus making the Incarnation of Fate inexperienced in all three aspects simultaneously. The current office-holders hope to use Niobe's previous experience as aspect of Fate as an ace in the hole
Ace in the Hole
Ace in the Hole may refer to:Music* Ace in the Hole , the backup band for George Strait* "Ace in the Hole," a 1909 jazz standard written by George D. Mitchell & James E...
to prevent Satan's current plot from coming to fruition.

They learn that Satan plans to cause political turmoil in the UN by having one of his minions plant a stink-bomb. They are forced to waste time by investigating the likely minions one by one, but in the meantime Satan is offering aging political candidates a chance at renewed youth, and the opportunity to start over in their careers, in exchange for their resignation from office. He plans to replace them with his own minions, who would work against Luna. The three Fates realize that their inexperience is a liability, so they seek help. They learn that Niobe's son, the magician, can help them—unfortunately, he is now in Hell. Satan cannot prevent them from searching for the magician, but he can make the quest very unpleasant and one of them must risk her own soul in the process. Niobe is worried that Satan will cheat, so she arranges for the Incarnation of War to supervise the contest.

Niobe leaves the Fates' collective body and goes to Hell. She must beat Satan's challenge—a puzzle-maze—in order to get the answers she is looking for. At the end, she finds her son, but Satan has cast an illusion over him. She puzzles out the answer anyway—that Satan's plot can be stopped by the Atropos aspect of Fate: Atropos can cut short the lives of Satan's minions, making his plot futile. Niobe wins the game and is allowed to leave Hell freely.


The Thread of Life

Fate's primary concern is with the threads that govern mortal lives. As Clotho, she spins them from the Void of Chaos, as Lachesis, she measures and places them, and as Atropos, she cuts them. She can create travel-threads at will, sending them out and traveling along them wherever she wishes, as well as "Read-Only" threads to allow her to check that everything is running smoothly. In addition, an invisible web of them surrounds her at all times, protecting her from harm, as like some Incarnations, she cannot be killed.

The Tapestry of life is an immeasurably enormous tapestry, containing all the threads of life from the beginning of time to the end, chronicling all of human existence. Fate's task is to build and maintain the tapestry, though like all of the Incarnations, she has a staff that handles the routine issues - there is simply too much for her to do it all herself. The Tapestry has many unusual properties - its main one being that it does not function as something only half complete. It does not end where they are working on it, but simply fades into the future, or becomes impenetrably tangled and impossible to read. Correcting these tangles is what takes up much of Fate's time, in addition to working with Chronos to schedule where in the tapestry each thread should be anchored and where it should be cut. A semi-physical form of the Tapestry resides in Fate's Abode, but it is merely a representation - the true Tapestry is so massive and complex as to be incomprehensible except at a very specific level. As such, the Tapestry can only be harmed indirectly, by altering individual events - the Tapestry as a whole remains largely untouchable.

Of all the incarnations, Fate's transfer is the simplest and the easiest. It is also unusual in that when an Incarnation of Fate steps down, she is actually returned to mortal life, rather than being sent on to Heaven or Hell. The only other Incarnation who follows this is Nature. Fate's transfers, however, are completely voluntary on all sides. When one of the Aspects of Fate decides she is tired of being an Incarnation, she chooses an appropriate successor and offers them the job. If they decline, she picks another. If they agree, the exchange is as simple as a handshake. Like all the Incarnations, Fate favors a particular gender, though she is one of only two (the other being God) that is actually shown as using both, as at one point a male Atropos is picked. However, due to the fact that they share one body and the discomfort it might cause the other incarnations, who sometimes dally with Clotho, he disguises himself as a woman.

In a review for the Library Journal
Library Journal
Library Journal is a trade publication for librarians. It was founded in 1876 by Melvil Dewey . It reports news about the library world, emphasizing public libraries, and offers feature articles about aspects of professional practice...
, Jackie Cassada says that With a Tangled Skein is "full of logic puzzles and mazes to unravel, this latest novel by the prolific Anthony will please his many fans."
The source of this article is wikipedia, the free encyclopedia.  The text of this article is licensed under the GFDL.