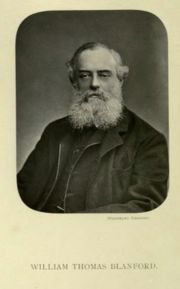 William Thomas Blanford (7 October 1832 – 23 June 1905) was an English
England
England is a country that is part of the United Kingdom. It shares land borders with Scotland to the north and Wales to the west; the Irish Sea is to the north west, the Celtic Sea to the south west, with the North Sea to the east and the English Channel to the south separating it from continental...
geologist
Geologist
A geologist is a scientist who studies the solid and liquid matter that constitutes the Earth as well as the processes and history that has shaped it. Geologists usually engage in studying geology. Geologists, studying more of an applied science than a theoretical one, must approach Geology using...
and naturalist
Natural history
Natural history is the scientific research of plants or animals, leaning more towards observational rather than experimental methods of study, and encompasses more research published in magazines than in academic journals. Grouped among the natural sciences, natural history is the systematic study...
. He is best remembered as the editor of a major series on The Fauna of British India, Including Ceylon and Burma.

Blanford was born in London
London
London is the capital city of :England and the :United Kingdom, the largest metropolitan area in the United Kingdom, and the largest urban zone in the European Union by most measures. Located on the River Thames, London has been a major settlement for two millennia, its history going back to its...
. He was educated in private schools in Brighton
Brighton
Brighton is the major part of the city of Brighton and Hove in East Sussex, England on the south coast of Great Britain...
and Paris
Paris
Paris is the capital and largest city in France, situated on the river Seine, in northern France, at the heart of the Île-de-France region...
, and spent two years in a business house at Civitavecchia
Civitavecchia
Civitavecchia is a town and comune of the province of Rome in the central Italian region of Lazio. A sea port on the Tyrrhenian Sea, it is located 80 kilometers west-north-west of Rome, across the Mignone river. The harbor is formed by two piers and a breakwater, on which is a lighthouse...
aiming to enter a mercantile career. On returning to England in 1851 he was induced to enter the newly established Royal School of Mines
Royal School of Mines
Royal School of Mines comprises the departments of Earth Science and Engineering, and Materials at Imperial College London.- History :The Royal School of Mines was established in 1851, as the Government School of Mines and Science Applied to the Arts...
(now part of Imperial College London
Imperial College London
Imperial College London is a public research university located in London, United Kingdom, specialising in science, engineering, business and medicine...
), which his younger brother Henry F. Blanford
Henry Francis Blanford
Henry Francis Blanford was a British meteorologist and paleontologist who worked in India...
(1834 – 1893), afterwards head of the Indian Meteorological Department, had already joined. He studied under Henry De la Beche
Henry De la Beche
Sir Henry Thomas De la Beche FRS was an English geologist and palaeontologist who helped pioneer early geological survey methods.-Biography:...
, Lyon Playfair, Edward Forbes
Edward Forbes
Professor Edward Forbes FRS, FGS was a Manx naturalist.-Early years:Forbes was born at Douglas, in the Isle of Man. While still a child, when not engaged in reading, or in the writing of verses and drawing of caricatures, he occupied himself with the collecting of insects, shells, minerals,...
, Ramsay, and Warrington Smyth. He then spent a year in the mining school at Freiberg, Saxony
Freiberg, Saxony
Freiberg is a city in the Free State of Saxony, Germany, administrative center of the Mittelsachsen district.-History:The city was founded in 1186, and has been a center of the mining industry in the Ore Mountains for centuries...
, and towards the close of 1854 both he and his brother obtained posts on the Geological Survey of India
Geological Survey of India
Geological Survey of India , established in 1851 is a government organization in India which is an attached office to the Ministry of Mines of Union Government of India for conducting geological surveys and studies. It is one of the oldest of such organizations in the world and the second oldest...
. In that service he remained for twenty-seven years, retiring in 1882. After his retirement he took up editorship of The Fauna of British India, Including Ceylon and Burma series.

He was engaged in various parts of India, in the Raniganj coalfield, in Bombay, and in the coalfield near Talcher
Talcher
Talcher is one of the 4 sub-divisions of Anugul district in the Indian state of Orissa . Situated on the right bank of the river Brahmani, the capital of the erstwhile Talcher State is one of the fastest growing industrial and mining complexes of the country.-Geography:Talcher is located at...
, where boulders considered to have been ice-borne were found in the Talcher strata — a remarkable discovery confirmed by subsequent observations of other geologists in equivalent strata elsewhere.

His attention was given not only to geology but to zoology
Zoology
Zoology |zoölogy]]), is the branch of biology that relates to the animal kingdom, including the structure, embryology, evolution, classification, habits, and distribution of all animals, both living and extinct...
, and especially to the land gastropods and to the vertebrate
Vertebrate
Vertebrates are animals that are members of the subphylum Vertebrata . Vertebrates are the largest group of chordates, with currently about 58,000 species described. Vertebrates include the jawless fishes, bony fishes, sharks and rays, amphibians, reptiles, mammals, and birds...
s. In 1866 he was attached to the Abyssinian
Ethiopia
Ethiopia , officially known as the Federal Democratic Republic of Ethiopia, is a country located in the Horn of Africa. It is the second-most populous nation in Africa, with over 82 million inhabitants, and the tenth-largest by area, occupying 1,100,000 km2...
expedition, accompanying the army to Magdala
Magdala
Magdala is the name of at least two places in ancient Israel mentioned in the Jewish Talmud and one place that may be mentioned in the Christian New Testament...
and back; and in 1871 – 1872 he was appointed a member of the Persian
Iran
Iran , officially the Islamic Republic of Iran , is a country in Southern and Western Asia. The name "Iran" has been in use natively since the Sassanian era and came into use internationally in 1935, before which the country was known to the Western world as Persia...
Boundary Commission along with O. B. St. John
Oliver St John (civil servant)
Sir Oliver Beauchamp Coventry St. John, KCSI was an administrator in British India. He served as the Chief Commissioner of Balochistan for ten years....
. After a voyage to Basra he started back from Gwadar, 200 miles west of Karachi. Marching to Shiraz with St. John's party and then travelled alone through Ispahan to Teheran to join Sir Richard Pollock. He visited the Elbruz Mountains and returned to England from the Caspian via Astrakhan, Moscow, St. Petersburg and Berlin to reach home in September 1872. The best use was made of the exceptional opportunities of studying the natural history of those countries. He subsequently spent time to produce the report on Zoology. He represented the Indian Government at the meeting of the Geological Congress in Bologna.

In 1883 he married Ida Gertrude Bellhouse, and settled at Bedford Gardens, Campden Hill
Campden Hill
Campden Hill is an area of high ground in west London between Notting Hill, Kensington and Holland Park.The area is characterised by large Victorian houses. It is also the site of reservoirs established in the 19th century by the Grand Junction Waterworks Company and the West Middlesex Waterworks...
.

His principal publications were: Observations on the Geology and Zoology of Abyssinia (1870), Manual of the Geology of India, with H. B. Medlicott
Henry Benedict Medlicott
Henry Benedict Medlicott was an Irish geologist who worked in India.-Early life:He was born in Loughrea, County Galway, Ireland, the son of the Church of Ireland Rector of Loughrea, Samuel Medlicott and his wife Charlotte , daughter of Henry Benedict Dolphin, C. B...
(1879) and the third volume in Birds following the work of E. W. Oates
Eugene William Oates
Eugene William Oates was an English naturalist.Oates was born in Sicily and educated in Bath, England. For a time he attended Sydney College, Bath and later under private tutors. He was a civil servant in the Public Works Department in India and Burma from 1867 to 1899...
in The Fauna of British India, Including Ceylon and Burma series.

Taxa named in honor of William Thomas Blanford include: