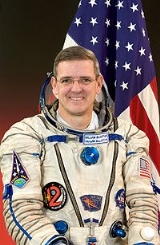 Encyclopedia
William Surles McArthur, Jr. (born 26 July 1951) is a retired U.S. Army Colonel, a NASA
NASA
The National Aeronautics and Space Administration is the agency of the United States government that is responsible for the nation's civilian space program and for aeronautics and aerospace research...
astronaut
Astronaut
An astronaut or cosmonaut is a person trained by a human spaceflight program to command, pilot, or serve as a crew member of a spacecraft....
, and a veteran of three space shuttle
Space Shuttle
The Space Shuttle was a manned orbital rocket and spacecraft system operated by NASA on 135 missions from 1981 to 2011. The system combined rocket launch, orbital spacecraft, and re-entry spaceplane with modular add-ons...
missions and one expedition to the International Space Station
International Space Station
The International Space Station is a habitable, artificial satellite in low Earth orbit. The ISS follows the Salyut, Almaz, Cosmos, Skylab, and Mir space stations, as the 11th space station launched, not including the Genesis I and II prototypes...
via the Russia
Russia
Russia or , officially known as both Russia and the Russian Federation , is a country in northern Eurasia. It is a federal semi-presidential republic, comprising 83 federal subjects...
n Soyuz
Soyuz spacecraft
Soyuz , Union) is a series of spacecraft initially designed for the Soviet space programme by the Korolyov Design Bureau in the 1960s, and still in service today...
capsule.

In 1987, McArthur attended the U.S. Naval Test Pilot School and was trained as an experimental test pilot. He was assigned to a post as a test engineer at NASA
NASA
The National Aeronautics and Space Administration is the agency of the United States government that is responsible for the nation's civilian space program and for aeronautics and aerospace research...
and was selected as an astronaut candidate in 1990. McArthur's first spaceflight was in 1993 aboard STS-58
STS-58
STS-58 shuttle mission of Space Shuttle Columbia launched from Kennedy Space Center, Florida, on 18 October 1993. It was also the last time Columbia would land at Edwards Air Force Base.-Crew:-Mission parameters:*Mass:...
. Subsequent missions included STS-74
STS-74
STS-74 was a Space Shuttle Atlantis mission to the Mir space station. It was the fourth mission of the US/Russian Shuttle-Mir Program, and it carried out the second docking of a space shuttle to Mir. Atlantis lifted off for the mission on 12 November 1995 from Kennedy Space Center launch pad 39A,...
in 1995 and STS-92
STS-92
STS-92 was a Space Shuttle mission to the International Space Station flown by Space Shuttle Discovery. STS-92 marked the 100th mission of the Space Shuttle...
in 2000.

In April 2006, McArthur and Expedition 13
Expedition 13
Expedition 13 was the 13th expedition to the International Space Station , and launched at 02:30 UTC on 30 March 2006. The expedition used the Soyuz TMA-8 spacecraft, which stayed at the station for the duration of the expedition for emergency evacuation....
flight officer Jeffrey Williams tested a new method of preparing for spacewalks by "camping out" or spending the night in the Quest airlock
Joint Airlock
The Quest Joint Airlock, previously known as the Joint Airlock Module, is the primary airlock for the International Space Station. Quest was designed to host spacewalks with both Extravehicular Mobility Unit spacesuits and Orlan space suits. The airlock was launched on STS-104 on July 14, 2001...
, the decompression capsule through which astronauts enter and exit space. In the chamber the pressure was reduced from the normal 14.7 pounds per square inch (psi) to 10.2 psi. The more commonly used method of preparing for spacewalks involves breathing pure oxygen for several hours to purge the body of nitrogen and avoid the bends
Decompression sickness
Decompression sickness describes a condition arising from dissolved gases coming out of solution into bubbles inside the body on depressurization...
. The "campout" method was intended to shorten that lengthy preparation time. Four hours into their sleep an error tone prompted mission controllers to cut short the activity, though it was still deemed a success.