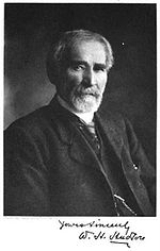 Encyclopedia
William Henry Hudson was an author, naturalist
Natural history
Natural history is the scientific research of plants or animals, leaning more towards observational rather than experimental methods of study, and encompasses more research published in magazines than in academic journals. Grouped among the natural sciences, natural history is the systematic study...
, and ornithologist
Ornithology
Ornithology is a branch of zoology that concerns the study of birds. Several aspects of ornithology differ from related disciplines, due partly to the high visibility and the aesthetic appeal of birds...
.

Hudson was born in the Quilmes, a borough (partido) of the greater Buenos Aires
Buenos Aires
Buenos Aires is the capital and largest city of Argentina, and the second-largest metropolitan area in South America, after São Paulo. It is located on the western shore of the estuary of the Río de la Plata, on the southeastern coast of the South American continent...
, in Buenos Aires Province
Buenos Aires Province
The Province of Buenos Aires is the largest and most populous province of Argentina. It takes the name from the city of Buenos Aires, which used to be the provincial capital until it was federalized in 1880...
, Argentina
Argentina
Argentina , officially the Argentine Republic , is the second largest country in South America by land area, after Brazil. It is constituted as a federation of 23 provinces and an autonomous city, Buenos Aires...
, son of settlers of U.S.
United States
The United States of America is a federal constitutional republic comprising fifty states and a federal district...
origin. He spent his youth studying the local flora and fauna and observing both natural and human dramas on what was then a lawless frontier, publishing his ornithological work in Proceedings of the Royal Zoological Society, initially in an English mingled with Spanish idioms.

Hudson settled in England
England
England is a country that is part of the United Kingdom. It shares land borders with Scotland to the north and Wales to the west; the Irish Sea is to the north west, the Celtic Sea to the south west, with the North Sea to the east and the English Channel to the south separating it from continental...
during 1874. He produced a series of ornithological studies, including Argentine Ornithology (1888–1899) and British Birds (1895), and later achieved fame with his books on the English countryside, including Hampshire Day (1903), Afoot in England (1909) and A Shepherd's Life (1910), which helped foster the back-to-nature movement of the 1920s and 1930s.

In Argentina, Hudson is considered to belong to the national literature as Guillermo Enrique Hudson, the Spanish version of his name. A town in Berazategui Partido
Berazategui Partido
Berazategui is a partido in Buenos Aires Province, Argentina. With a surface of 188 km²  and a population of 320,224 , it is located at the southeast of the Greater Buenos Aires urban conglomerate, and its capital is Berazategui city.It was part of the Quilmes Partido until 1960.The...
and several other public places and institutions are named after him.

Towards the end of his life, Hudson moved to Worthing in Sussex, England. His grave is in Broadwater and Worthing Cemetery in Worthing
Worthing
Worthing is a large seaside town with borough status in West Sussex, within the historic County of Sussex, forming part of the Brighton/Worthing/Littlehampton conurbation. It is situated at the foot of the South Downs, west of Brighton, and east of the county town of Chichester...
.