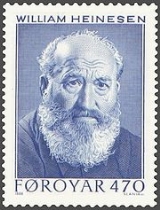 Encyclopedia
Andreas William Heinesen (15 January 1900 – 12 March 1991) was a poet, composer and painter from the Faroe Islands
Faroe Islands
The Faroe Islands are an island group situated between the Norwegian Sea and the North Atlantic Ocean, approximately halfway between Scotland and Iceland. The Faroe Islands are a self-governing territory within the Kingdom of Denmark, along with Denmark proper and Greenland...
.

The Faroese capital Tórshavn is always the centre of Heinesen's writing. He is famous for having once called Tórshavn "The Navel of the World". His writing focuses on contrasts between darkness and light, between destruction and creativity. Then following is the existential struggle of man to take sides. This is not always easy, however, and the lines between good and bad are not always clearly defined. Furthermore, Heinesen was captivated by the mysterious part of life. He called himself religious in the broadest sense of the word. His life could be described as a struggle against defeatism. One oft-quoted aphorism of his is that "life is not despair, and death shall not rule".

As he was born and raised before the Faroese language was taught in the schools, he wrote mainly in Danish
Danish language
Danish is a North Germanic language spoken by around six million people, principally in the country of Denmark. It is also spoken by 50,000 Germans of Danish ethnicity in the northern parts of Schleswig-Holstein, Germany, where it holds the status of minority language...
but his spoken language was Faroese. All his books are later translated into his native Faroese
Faroese language
Faroese , is an Insular Nordic language spoken by 48,000 people in the Faroe Islands and about 25,000 Faroese people in Denmark and elsewhere...
.

He published his first collection of poetry when he was 21. He had three more published before he wrote his first novel Blæsende gry - Stormy Dawn - in 1934. He read every single one of the chapters to the painter Sámal Joensen-Mikines
Sámal Joensen-Mikines
Sámuel Joensen-Mikines was a Faroese painter. He was the first recognised painter of the Faroe Islands and one of the Faroe Islands most important artists. Many of his paintings have been displayed on Faroese stamps....
, as he was worried that his Danish wasn't good enough. That was followed up with Noatún (1938). Noatún has a strong political message - solidarity is the key to a good society. His next book The Black Cauldron (1949) deals with the aftermath of decadent living combined with religious hysteria. In The Lost Musicians (1950) Heinesen leaves the social realism of his earlier works behind, instead giving himself over to straightforward storytelling. Mother Pleiades (1952) is an ode to his imagination. Its subtitle is "a Story From the Beginning of Time".

Heinesen wasn't content with writing only novels. In the fifties he began writing short stories as well. Most of them have been printed in these three collections entitled The Enchanted light, Gamaliel's Bewitchment and Cure Against Evil Spirits (1969). In the novel The Good Hope
The Good Hope (novel)
The Good Hope is a 1964 novel by the Faroese writer William Heinesen. It received the Nordic Council Literature Prize....
, his main character the Rev. Peder Børresen is based on the historical person Rev. Lucas Debes
Lucas Debes
Lucas Jacobsøn Debes was a Danish priest, topographer and celebrated writer about the Faroe Islands. He wrote the first book about the Faroes, which was printed and draw the first detailed map of the islands.-His Arrival to Tórshavn:Debes came to the Faroe Islands in 1652 as a curate...
. When Heinesen was asked how long it had taken to write it, he answered "forty years. But then I did other things in between"

The Faroese language
Faroese language
Faroese , is an Insular Nordic language spoken by 48,000 people in the Faroe Islands and about 25,000 Faroese people in Denmark and elsewhere...
was once held in little regard – indeed it was suppressed outright. In spite of this the Faroese language has created a great literature, and it would have been reasonable to give the Nobel Prize to an author who writes in Faroese. If it had been given to me, it would have gone to an author who writes in Danish, and in consequence Faroese efforts to create an independent culture would have been dealt a blow.

In 1980 on his 80th birthday Heinesen was appointed "Tórshavn's Citizen of Honour" by his home town.