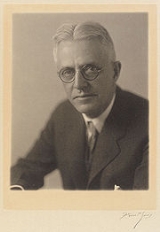 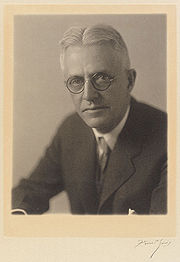 Lewis saw a national role for the Law School, one that would fill the role of the fading apprenticeship system for young lawyers. Development of a core of full-time faculty sat at the top of Lewis’s agenda, but he gave equal attention to curriculum, admissions and graduation standards, and facilities — in particular the library. A pragmatist and a humanist, he established the tradition at Penn Law of the dean as first among equals.

Lewis treated his colleagues and friends with enormous good humor and tolerance. He was, perhaps more than anyone before or since at the Law School, a grand master of consensus. He was also continually concerned with student welfare; a goodly part of each faculty meeting was given over to the discussion of student "petitions" for relief of one kind or another.

He cared about, stewed over, and poked into every conceivable aspect of the School. He arranged stays for sick students at sanitariums. He even toured the guts of his grand new building (opened in 1900) to understand and correct malfunctions of the heating and ventilation system.

A compulsive communicator, Lewis dictated letters a dozen at a time and served as recording secretary for faculty meetings. His mailings to prospective students and their parents could run to three or four typed pages, intermixing his philosophy of education with practical concerns directed to the inquirer’s situation.

However, though well-loved by students and universally referred to as "Uncle Billy," he appears to have been rather a mess as a teacher. At a 1934 dinner for Lewis, Pepper called him "one of the most lovable and whimsical personalities which any of us have met in a lifetime. ... [W]e reserve the right to rejoice in his split infinitives, his mixed metaphors and the strange beings with which his imagination peopled the cases discussed in his classroom."

Lewis could be quite deliberately funny, sometimes getting himself in hot water. To the secretary of the University he writes in 1900: "I have received your formal apology for your very grave mistake concerning the University Council. What it was all about I have not the slightest idea, but evidently if anything was wrong, the letter before me makes everything right."

He was also a manager of the 1907-founded Comparative Law Bureau of the American Bar Association
American Bar Association
The American Bar Association , founded August 21, 1878, is a voluntary bar association of lawyers and law students, which is not specific to any jurisdiction in the United States. The ABA's most important stated activities are the setting of academic standards for law schools, and the formulation...
, whose Annual Bulletin was the first comparative law
Comparative law
Comparative law is the study of differences and similarities between the law of different countries. More specifically, it involves study of the different legal systems in existence in the world, including the common law, the civil law, socialist law, Islamic law, Hindu law, and Chinese law...
journal in the U.S.

During the later years of his deanship, Lewis’s attention was diverted and all but consumed by the politics of the Progressive Republican movement. A confidant of Theodore Roosevelt
Theodore Roosevelt
Theodore "Teddy" Roosevelt was the 26th President of the United States . He is noted for his exuberant personality, range of interests and achievements, and his leadership of the Progressive Movement, as well as his "cowboy" persona and robust masculinity...
, Lewis chaired the platform committee for Roosevelt’s failed run for President on the Bull Moose ticket in 1912. In his most politically impassioned (or naïve) maneuver, Lewis ran for Pennsylvania governor in 1914 on a straight Progressive platform, a dalliance which forced his resignation from the deanship but took him no closer to the governor’s mansion. He remained on the Law School faculty until 1924.

Though the ALI’s restatements met with complaints that they undermined the fluidity of the common law and echoed the codification of European civil law, it is fair to say Lewis’s work as director rank him as the single most influential figure in the pragmatic development of 20th-century American law.