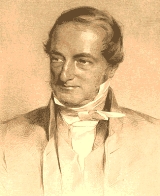 Encyclopedia
William Daniel Conybeare FRS (7 June 1787 – 12 August 1857), dean of Llandaff
Llandaff
Llandaff is a district in the north of Cardiff, capital of Wales, having been incorporated into the city in 1922. It is the seat of the Church in Wales Bishop of Llandaff, whose diocese covers the most populous area of South Wales. Much of the district is covered by parkland known as Llandaff...
, was an English geologist, palaeontologist and clergyman. He is probably best known for his ground-breaking work on marine reptile fossils in the 1820s, including important papers for the Geological Society of London
Geological Society of London
The Geological Society of London is a learned society based in the United Kingdom with the aim of "investigating the mineral structure of the Earth"...
on ichthyosaur
Ichthyosaur
Ichthyosaurs were giant marine reptiles that resembled fish and dolphins...
anatomy and the first published scientific description of a plesiosaur
Plesiosaur
Plesiosauroidea is an extinct clade of carnivorous plesiosaur marine reptiles. Plesiosauroids, are known from the Jurassic and Cretaceous Periods...
.

He was a grandson of John Conybeare
John Conybeare
John Conybeare DD was Bishop of Bristol and one of the most notable theologians of the 18th century.Conybeare was born at Pinhoe, where his father was vicar, and educated at Blundell's School and Exeter College, Oxford. He was elected a Probationary Fellow of Exeter College in 1710, took his B.A...
, bishop of Bristol
Bristol
Bristol is a city, unitary authority area and ceremonial county in South West England, with an estimated population of 433,100 for the unitary authority in 2009, and a surrounding Larger Urban Zone with an estimated 1,070,000 residents in 2007...
(1692–1755), a notable preacher and divine, and son of Dr William Conybeare, rector of Bishopsgate
Bishopsgate
Bishopsgate is a road and ward in the northeast part of the City of London, extending north from Gracechurch Street to Norton Folgate. It is named after one of the original seven gates in London Wall...
. Born in London
London
London is the capital city of :England and the :United Kingdom, the largest metropolitan area in the United Kingdom, and the largest urban zone in the European Union by most measures. Located on the River Thames, London has been a major settlement for two millennia, its history going back to its...
, he was educated there at Westminster School
Westminster School
The Royal College of St. Peter in Westminster, almost always known as Westminster School, is one of Britain's leading independent schools, with the highest Oxford and Cambridge acceptance rate of any secondary school or college in Britain...
, then went in 1805 to Christ Church, Oxford
Christ Church, Oxford
Christ Church or house of Christ, and thus sometimes known as The House), is one of the largest constituent colleges of the University of Oxford in England...
, where in 1808 he took his degree of BA
Bachelor of Arts
A Bachelor of Arts , from the Latin artium baccalaureus, is a bachelor's degree awarded for an undergraduate course or program in either the liberal arts, the sciences, or both...
, with a first in classics and second in mathematics
Mathematics
Mathematics is the study of quantity, space, structure, and change. Mathematicians seek out patterns and formulate new conjectures. Mathematicians resolve the truth or falsity of conjectures by mathematical proofs, which are arguments sufficient to convince other mathematicians of their validity...
, and proceeded to MA
Master's degree
A master's is an academic degree granted to individuals who have undergone study demonstrating a mastery or high-order overview of a specific field of study or area of professional practice...
three years later.

Having entered holy orders he became in 1814 curate of Wardington
Wardington
Wardington is a village and civil parish in Oxfordshire, about northeast of Banbury. The village consists of two parts, Lower Wardington and Upper Wardington...
, near Banbury
Banbury
Banbury is a market town and civil parish on the River Cherwell in the Cherwell District of Oxfordshire. It is northwest of London, southeast of Birmingham, south of Coventry and north northwest of the county town of Oxford...
, and he accepted also a lectureship at Brislington
Brislington
Brislington is an area in the south east of the city of Bristol, England. It is on the edge of Bristol and from Bath. The Brislington Brook runs through the area in the woodlands of Nightingale Valley...
near Bristol. During this period he was one of the founders of the Bristol Philosophical Institution (1822). He was rector of Sully in Glamorganshire from 1823 to 1836, and vicar of Axminster
Axminster
Axminster is a market town and civil parish on the eastern border of Devon in England. The town is built on a hill overlooking the River Axe which heads towards the English Channel at Axmouth, and is in the East Devon local government district. It has a population of 5,626. The market is still...
from 1836 to 1844. He was appointed Bampton lecturer in 1839, and was instituted to the deanery of Llandaff
Llandaff
Llandaff is a district in the north of Cardiff, capital of Wales, having been incorporated into the city in 1922. It is the seat of the Church in Wales Bishop of Llandaff, whose diocese covers the most populous area of South Wales. Much of the district is covered by parkland known as Llandaff...
in 1845.

Attracted to the study of geology
Geology
Geology is the science comprising the study of solid Earth, the rocks of which it is composed, and the processes by which it evolves. Geology gives insight into the history of the Earth, as it provides the primary evidence for plate tectonics, the evolutionary history of life, and past climates...
by the lectures of Dr John Kidd he pursued the subject with ardour. As soon as he had left college he made extended journeys in Britain and on the continent, and he became one of the early members of the Geological Society. Both Buckland
William Buckland
The Very Rev. Dr William Buckland DD FRS was an English geologist, palaeontologist and Dean of Westminster, who wrote the first full account of a fossil dinosaur, which he named Megalosaurus...
and Sedgwick
Adam Sedgwick
Adam Sedgwick was one of the founders of modern geology. He proposed the Devonian period of the geological timescale...
acknowledged their indebtedness to him for instruction received when they first began to devote attention to geology.
To the Transactions of the Geological Society as well as to the Annals of Philosophy and Philosophical Magazine he contributed many geological memoirs. In 1821, in collaboration with Henry De la Beche
Henry De la Beche
Sir Henry Thomas De la Beche FRS was an English geologist and palaeontologist who helped pioneer early geological survey methods.-Biography:...
he distinguished himself by describing, from fragmentary remains, the saurian Plesiosaurus
Plesiosaurus
Plesiosaurus was a genus of large marine sauropterygian reptile that lived during the early part of the Jurassic Period, and is known by nearly complete skeletons from the Lias of England...
in a paper for the Geological that also contained an important description and analysis of all that had been learned to that point about the anatomy of ichthyosaur
Ichthyosaur
Ichthyosaurs were giant marine reptiles that resembled fish and dolphins...
s including the fact that there had been at least three different species. His predictions about the plesiosaur wer proved correct by the discovery of a nearly complete skeleton by Mary Anning
Mary Anning
Mary Anning was a British fossil collector, dealer and palaeontologist who became known around the world for a number of important finds she made in the Jurassic age marine fossil beds at Lyme Regis where she lived...
in 1823, which Conybeare described to the Geological Society in 1824. Among his most important memoirs is that on the south-western coal district of England, written in conjunction with Dr Buckland, and published in 1824.
He wrote also on the valley of the Thames, on Elie de Beaumont's theory of mountain-chains, and on the great landslip which occurred near Lyme Regis
Lyme Regis
Lyme Regis is a coastal town in West Dorset, England, situated 25 miles west of Dorchester and east of Exeter. The town lies in Lyme Bay, on the English Channel coast at the Dorset-Devon border...
in 1839 when he was vicar of Axminster.

His principal work, however, is the Outlines of the Geology of England and Wales (1822), being a second edition of the small work issued by William Phillips
William Phillips (geologist)
William Phillips FRS was an English mineralogist and geologist.Phillips was the son of James Phillips, printer and bookseller in London. He became interested in mineralogy and geology, and was one of the founders of the Geological Society of London...
and written in co-operation with that author. The original contributions of Conybeare formed the principal portion of this edition, of which only Part 1, dealing with the Carboniferous
Carboniferous
The Carboniferous is a geologic period and system that extends from the end of the Devonian Period, about 359.2 ± 2.5 Mya , to the beginning of the Permian Period, about 299.0 ± 0.8 Mya . The name is derived from the Latin word for coal, carbo. Carboniferous means "coal-bearing"...
and newer strata, was published. It affords evidence throughout of the extensive and accurate knowledge possessed by Conybeare; and it exercised a marked influence on the progress of geology in Britain.

The loss of his eldest son, WJ Conybeare
William John Conybeare
William John Conybeare was an English vicar, essayist and novelist.He was the son of Dean WD Conybeare, and was educated at Westminster and at Trinity College, Cambridge, where he was elected fellow in 1837....
, preyed on his mind and hastened his end. He died a few months after his son, on 12 August 1857, at Itchen Stoke
Itchen Stoke
Itchen Stoke is a village in Hampshire, England. The village lies in the valley of the River Itchen, north east of Winchester, and south east of Itchen Abbas....
, Hampshire, where another son, Charles Ranken Conybeare, had recently taken up the incumbency
Incumbent (ecclesiastical)
In Anglican canon law, the incumbent of a benefice, usually the parish priest, holds the temporalities or assets and income.Depending on the terms of governance of each parish an incumbent might be either:...
of the parish church, and a third son, Henry Conybeare
Henry Conybeare
Henry Conybeare was an English civil engineer and Gothic revival architect who designed two notable churches and greatly improved the supply of drinking water to Mumbai.-Early life in England and work in India:...
, was to build a new church to replace it.
He is buried in Brompton Cemetery
Brompton Cemetery
Brompton Cemetery is located near Earl's Court in South West London, England . It is managed by The Royal Parks and is one of the Magnificent Seven...
, London. (Another source suggests he is buried near the Chapter House at Llandaff
Llandaff
Llandaff is a district in the north of Cardiff, capital of Wales, having been incorporated into the city in 1922. It is the seat of the Church in Wales Bishop of Llandaff, whose diocese covers the most populous area of South Wales. Much of the district is covered by parkland known as Llandaff...
Cathedral.)
The source of this article is wikipedia, the free encyclopedia.  The text of this article is licensed under the GFDL.