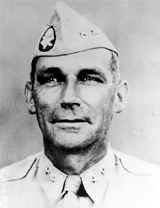 Encyclopedia
Major General William Carey "Bill" Lee (March 12, 1895 – June 25, 1948) was an American
United States
The United States of America is a federal constitutional republic comprising fifty states and a federal district...
U.S. Army soldier
Soldier
A soldier is a member of the land component of national armed forces; whereas a soldier hired for service in a foreign army would be termed a mercenary...
and general. Lee is often referred to as the "Father of the U.S. Airborne
Airborne forces
Airborne forces are military units, usually light infantry, set up to be moved by aircraft and 'dropped' into battle. Thus they can be placed behind enemy lines, and have an ability to deploy almost anywhere with little warning...
".

William Carey Lee was born in Dunn, North Carolina
Dunn, North Carolina
Dunn is a city in Harnett County, North Carolina, United States. The population was 9,196 at the 2000 census.It is the birthplace of early an rock and roll guitar player, Link Wray, and General William C. Lee, father of the American Army Airborne. The city's slogan is "It's all right here." The...
, one of the seven children of Eldridge Lee and his wife Emma. His father was a merchant. He attended Wake Forest College
Wake Forest University
Wake Forest University is a private, coeducational university in the U.S. state of North Carolina, founded in 1834. The university received its name from its original location in Wake Forest, north of Raleigh, North Carolina, the state capital. The Reynolda Campus, the university's main campus, is...
and North Carolina State College
North Carolina State University
North Carolina State University at Raleigh is a public, coeducational, extensive research university located in Raleigh, North Carolina, United States. Commonly known as NC State, the university is part of the University of North Carolina system and is a land, sea, and space grant institution...
. He participated in the ROTC program, graduated from NC State. and was commissioned a second lieutenant in the U.S. Army in 1917. Lee served in World War I
World War I
World War I , which was predominantly called the World War or the Great War from its occurrence until 1939, and the First World War or World War I thereafter, was a major war centred in Europe that began on 28 July 1914 and lasted until 11 November 1918...
with the American Expeditionary Force
American Expeditionary Force
The American Expeditionary Forces or AEF were the United States Armed Forces sent to Europe in World War I. During the United States campaigns in World War I the AEF fought in France alongside British and French allied forces in the last year of the war, against Imperial German forces...
in France
France
The French Republic , The French Republic , The French Republic , (commonly known as France , is a unitary semi-presidential republic in Western Europe with several overseas territories and islands located on other continents and in the Indian, Pacific, and Atlantic oceans. Metropolitan France...
.

By the time the United States entered World War II
World War II
World War II, or the Second World War , was a global conflict lasting from 1939 to 1945, involving most of the world's nations—including all of the great powers—eventually forming two opposing military alliances: the Allies and the Axis...
, Lee had reached the rank of major general and was a proponent of paratrooper
Paratrooper
Paratroopers are soldiers trained in parachuting and generally operate as part of an airborne force.Paratroopers are used for tactical advantage as they can be inserted into the battlefield from the air, thereby allowing them to be positioned in areas not accessible by land...
warfare. Although airborne units were not popular with U.S. Army commanders, President Franklin D. Roosevelt
Franklin D. Roosevelt
Franklin Delano Roosevelt , also known by his initials, FDR, was the 32nd President of the United States and a central figure in world events during the mid-20th century, leading the United States during a time of worldwide economic crisis and world war...
sponsored the concept, and Lee was authorized to form the first paratroop platoon. This was followed by the Provisional Parachute Group, and finally the United States Army Airborne Command. Lee was the first commander of the Army's jump school at Fort Benning
Fort Benning
Fort Benning is a United States Army post located southeast of the city of Columbus in Muscogee and Chattahoochee counties in Georgia and Russell County, Alabama...
, Georgia
Georgia (U.S. state)
Georgia is a state located in the southeastern United States. It was established in 1732, the last of the original Thirteen Colonies. The state is named after King George II of Great Britain. Georgia was the fourth state to ratify the United States Constitution, on January 2, 1788...
. He received the Distinguished Service Medal for his early leadership in the creation of the airborne forces.

In August 1942, Lee was the commander of the newly formed 101st Airborne Division
101st Airborne Division
The 101st Airborne Division—the "Screaming Eagles"—is a U.S. Army modular light infantry division trained for air assault operations. During World War II, it was renowned for its role in Operation Overlord, the D-Day landings on 6 June 1944, in Normandy, France, Operation Market Garden, the...
, based at Camp Claiborne
Camp Claiborne
Camp Claiborne was a U.S. Army military camp during World War II located in Rapides Parish in central Louisiana. The camp was under the jurisdiction of the U.S. Eighth Service Command, and included 23,000 acres ....
, in Louisiana
Louisiana
Louisiana is a state located in the southern region of the United States of America. Its capital is Baton Rouge and largest city is New Orleans. Louisiana is the only state in the U.S. with political subdivisions termed parishes, which are local governments equivalent to counties...
. He told his men, "The 101st has no history, but it has a rendezvous with destiny."

Lee helped plan the D-Day
D-Day
D-Day is a term often used in military parlance to denote the day on which a combat attack or operation is to be initiated. "D-Day" often represents a variable, designating the day upon which some significant event will occur or has occurred; see Military designation of days and hours for similar...
drops into Normandy, and trained to jump with his men. However, he was ordered to the United States several months before the invasion, suffering either a heart attack
Myocardial infarction
Myocardial infarction or acute myocardial infarction , commonly known as a heart attack, results from the interruption of blood supply to a part of the heart, causing heart cells to die...
or a stroke
Stroke
A stroke, previously known medically as a cerebrovascular accident , is the rapidly developing loss of brain function due to disturbance in the blood supply to the brain. This can be due to ischemia caused by blockage , or a hemorrhage...
. He was replaced in by General Maxwell D. Taylor
Maxwell D. Taylor
General Maxwell Davenport "Max" Taylor was an United States Army four star general and diplomat of the mid-20th century, who served as the fifth Chairman of the Joint Chiefs of Staff after having been appointed by the President of the United States John F...
. To honor their founder, the paratroopers yelled "Bill Lee" as they jumped into France on D-Day.

William Lee retired from the Army for reasons of health in late 1944. He died at his home in Dunn, North Carolina four years later.

The General William C. Lee Airborne Museum is located in Dunn, in his former home.

Lee Residence Hall, one of the largest dormitories at North Carolina State University, is named after William C. Lee.

[NOTE: The "Bill Lee Freeway" in Charlotte, North Carolina
Charlotte, North Carolina
Charlotte is the largest city in the U.S. state of North Carolina and the seat of Mecklenburg County. In 2010, Charlotte's population according to the US Census Bureau was 731,424, making it the 17th largest city in the United States based on population. The Charlotte metropolitan area had a 2009...
, a section of Interstate 77
Interstate 77
Interstate 77 is an Interstate Highway in the eastern United States. It traverses diverse terrain, from the mountainous state of West Virginia to the rolling farmlands of North Carolina and Ohio. It largely supplants the old U.S...
is named for William States Lee III
William States Lee III
William States Lee III, popularly known as Bill Lee, was born in Charlotte, North Carolina in 1929. He attended Woodberry Forest School and was a Magna Cum Laude and Phi Beta Kappa graduate of Princeton University in Civil Engineering. After serving in the U.S. Navy SeaBees, Lee joined Duke Power’s...
(1929–1996), president and CEO of Duke Power and no known relation to the general.]