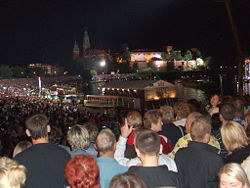 Wianki is a cyclical cultural event, taking place annually in Kraków
Kraków
Kraków also Krakow, or Cracow , is the second largest and one of the oldest cities in Poland. Situated on the Vistula River in the Lesser Poland region, the city dates back to the 7th century. Kraków has traditionally been one of the leading centres of Polish academic, cultural, and artistic life...
at the bend of Wisła river, near the Wawel
Wawel
Wawel is an architectural complex erected over many centuries atop a limestone outcrop on the left bank of the Vistula River in Kraków, Poland, at an altitude of 228 metres above the sea level. It is a place of great significance to the Polish people. The Royal Castle with an armoury and the...
hill.

In its current form of a mass cultural event, Wianki has existed since 1992, when the patronage of this event was taken over by the Kraków City Hall. However, the tradition of organising cultural events at this spot during the summer solstice reaches back a long time. The festival was primarily a pagan religious event - Noc Kupały
Ivan Kupala Day
Kupala Day is celebrated in Poland, Russia, Belarus and Ukraine currently on the night of 6/7 July in the Gregorian or New Style calendar, which is 23/24 June in the Julian or Old Style calendar still used by many Orthodox Churches. Calendar-wise, it is opposite to the winter solstice holiday...
. After the adoption of Christianity by Poland, the tradition did not die, hoverver, its context was changed: the night's name became "Sobótka", or "Noc Świętojańska" (St. John's Night). Some elements of the original festival remained, such as telling fortunes, letting wreaths float on water, jumping over bonfires or burning herbs. When Polish territory was annexed by Austria, especially after Kraków was incorporated into the Austro-Hungarian state, Wianki became a patriotic manifestation, when Wanda, the legendary princess from the legend of Prince Krak (the founder of Kraków) was commemorated. Before World War I
World War I
World War I , which was predominantly called the World War or the Great War from its occurrence until 1939, and the First World War or World War I thereafter, was a major war centred in Europe that began on 28 July 1914 and lasted until 11 November 1918...
Wianki was organised by institutions such as Polskie Towarzystwo Gimnastyczne "Sokół" ("Sokół" Polish Gymnastic Society).

After World War II
World War II
World War II, or the Second World War , was a global conflict lasting from 1939 to 1945, involving most of the world's nations—including all of the great powers—eventually forming two opposing military alliances: the Allies and the Axis...
Wreaths became a "light and sound" event - a large-scale open-air performance The event was partly a dramatic show (which featured theatre plays) and a finale firework show. In the 1970s media patronage was unknown in Poland, but Gazeta Krakowska
Gazeta Krakowska
The Gazeta Krakowska, is the largest regional daily newspaper in Kraków, Poland, published five times a week in that city. Gazeta Krakowska was established on February 15, 1949...
performed a form of it over the festival.

After martial law
Martial law
Martial law is the imposition of military rule by military authorities over designated regions on an emergency basis— only temporary—when the civilian government or civilian authorities fail to function effectively , when there are extensive riots and protests, or when the disobedience of the law...
was introduced in 1981, Wreaths were not officially organised until 1992. Starting that year, the event is the largest annual cultural event, covering music and other performances, a competition for the most beautiful wreath, firework shows and other attractions


Music performers during the show (starting 2000)