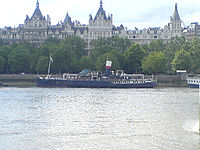 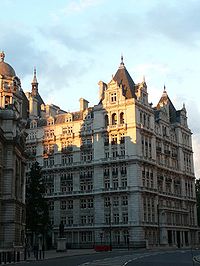 Whitehall Court in London, England is one contiguous building but consists of two separate constructions; the end occupied by the National Liberal Club
National Liberal Club
The National Liberal Club, known to its members as the NLC, is a London gentlemen's club, now also open to women, which was established by William Ewart Gladstone in 1882 for the purpose of providing club facilities for Liberal Party campaigners among the newly-enlarged electorate after the Third...
was designed by Alfred Waterhouse
Alfred Waterhouse
Alfred Waterhouse was a British architect, particularly associated with the Victorian Gothic Revival architecture. He is perhaps best known for his design for the Natural History Museum in London, and Manchester Town Hall, although he also built a wide variety of other buildings throughout the...
, the major part (including the Royal Horseguards Hotel) was designed by Archer & Green.

Whitehall Court was built during the mid-1880s by Archer & Green with financing provided by Jabez Balfour
Jabez Balfour
Jabez Spencer Balfour was a businessman, British Liberal Party politician and fraudster.-Life:He was the son of James Balfour and Clara Lucas Balfour....
.
The story that led to the creation of the building is described in Jabez: The rise and fall of a Victorian rogue by David McKie.

Well-known residents have included George Bernard Shaw
George Bernard Shaw
George Bernard Shaw was an Irish playwright and a co-founder of the London School of Economics. Although his first profitable writing was music and literary criticism, in which capacity he wrote many highly articulate pieces of journalism, his main talent was for drama, and he wrote more than 60...
, H. G. Wells
H. G. Wells
Herbert George Wells was an English author, now best known for his work in the science fiction genre. He was also a prolific writer in many other genres, including contemporary novels, history, politics and social commentary, even writing text books and rules for war games...
, Sarah Caudwell
Sarah Caudwell
Sarah Caudwell was the pseudonym of Sarah Cockburn , a British barrister and writer of detective stories.She is best known for a series of four murder stories written between 1980 and 1999, centred around the lives of a group of young barristers practicing in Lincoln’s Inn and narrated by a Hilary...
and Stafford Cripps
Stafford Cripps
Sir Richard Stafford Cripps was a British Labour politician of the first half of the 20th century. During World War II he served in a number of positions in the wartime coalition, including Ambassador to the Soviet Union and Minister of Aircraft Production...
. James Compton Merryweather
Merryweather
Merryweather can refer to:* Merryweather, one of the good fairies in Disney's Sleeping Beauty* Merryweather , a Canadian rock band from the 1960s* Merryweather & Sons, British builders of steam fire engines and steam tram engines* dr...
, the fire engineer, lived at number 4 from before 1902 to his death in 1917. It is also home to the Farmers Club
Farmers Club
The Farmers Club is a London club which is based at 3 Whitehall Court.-History:The club was founded in 1842 by the agricultural writer William Shaw, who invited the founder members from the newly-formed Royal Agricultural Society of England, and the Smithfield Club...
, the United Nations Association UK
United Nations Association UK
right|The United Nations Association of the UK is the leading independent policy authority on the UN in the UK and a UK-wide grassroots membership organisation.-Activities:...
and Liberal International
Liberal International
Liberal International is a political international federation for liberal parties. Its headquarters is located at 1 Whitehall Place, London, SW1A 2HD within the National Liberal Club. It was founded in Oxford in 1947, and has become the pre-eminent network for liberal parties and for the...
, which is housed within the National Liberal Club
National Liberal Club
The National Liberal Club, known to its members as the NLC, is a London gentlemen's club, now also open to women, which was established by William Ewart Gladstone in 1882 for the purpose of providing club facilities for Liberal Party campaigners among the newly-enlarged electorate after the Third...
.