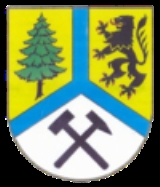 The district is located in the Ore Mountains, the central part is the Tharandt Forest
Tharandt Forest
The Tharandt Forest is a landscape in the centre of the German Free State of Saxony and lies southwest of the forest town of Tharandt, south of the town of Wilsdruff, roughly between the cities of Freiberg and Dresden...
. The district got its name after the two rivers Wilde Weißeritz
Wilde Weißeritz
The Wilde Weißeritz is a river in the Czech Republic and in Saxony which drains the eastern Ore Mountains. It is the longest tributary of the Weißeritz.The valley of the Wilde Weißeritz is almost free of settlements...
and Rote Weißeritz
Rote Weißeritz
The Red Weißeritz is a river in Saxony that drains the eastern Ore Mountains. It is a right tributary of the Weißeritz and is 36.5 km long...
, who merge near Freital into the Weißeritz
Weißeritz
The Weißeritz is a river in Saxony. The 12 km short left tributary of the Elbe runs through Freital and Dresden. Its name is derived from west Slavic bystrica . The official name of the river used in documents and hydrographic maps is Vereinigte Weißeritz...
river, and then mouths into the Elbe
Elbe
The Elbe is one of the major rivers of Central Europe. It rises in the Krkonoše Mountains of the northwestern Czech Republic before traversing much of Bohemia , then Germany and flowing into the North Sea at Cuxhaven, 110 km northwest of Hamburg...
in Dresden. The highest elevation is the Kahleberg
Kahleberg
Kahleberg is a mountain of Saxony, southeastern Germany.-History:Kahleberg is located 2 kilometres south-west of the mining town Altenburg, which is on the border of the Czech Republic....
at 905 metres (2,969.2 ft).

During the flooding in August 2002 the Weißeritz river had to drain many times the normal amount of water, and did destroy a lot of buildings in the river valley - houses, streets and bridges.