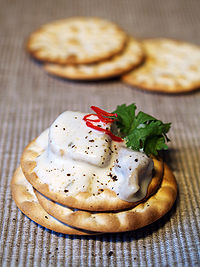 A water biscuit is a type of biscuit or cracker
Cracker (food)
A cracker is a baked good commonly made from grain flour dough and typically made in quantity in various hand-sized or smaller shapes. Flavorings or seasonings, such as salt, herbs, seeds, and/or cheese, may be added to the dough or sprinkled on top before baking...
. Water biscuits are baked using only flour and water, without shortening
Shortening
Shortening is any fat that is solid at room temperature and used to make crumbly pastry. The reason it is called shortening is because it prevents cross-linkage between gluten molecules. Cross linking is what causes doughs to be sticky. Seeing as cake is not meant to be sticky, shortening is used...
or other fats usually used in biscuit production. They are thin, hard and brittle, and usually served with cheese or wine. Originally produced in the 19th century as a version of the ship's biscuit
Hardtack
Hardtack is a simple type of cracker or biscuit, made from flour, water, and sometimes salt. Inexpensive and long-lasting, it was and is used for sustenance in the absence of perishable foods, commonly during long sea voyages and military campaigns. The name derives from the British sailor slang...
, water biscuits continue to be popular in the United Kingdom
United Kingdom
The United Kingdom of Great Britain and Northern IrelandIn the United Kingdom and Dependencies, other languages have been officially recognised as legitimate autochthonous languages under the European Charter for Regional or Minority Languages...
, with the leading brands (Carr's
Carr's
Carr's is the name of foodstuff and agricultural brands historically derived from founder Jonathan Dodgson Carr but now owned and marketed by more than one separate company. In 1831, Carr formed a small bakery and biscuit factory in the English city of Carlisle; he received a royal warrant in 1841...
and Jacob's
Jacob's
Jacob's is a brand name for several lines of biscuits and crackers. The brand name in the Republic of Ireland is owned by Jacob Fruitfield Food Group and in the United Kingdom it is owned under license by United Biscuits.-History:...
) selling over seventy million packets a year.

Carr's water biscuits are sold as Table Water crackers in the United States
United States
The United States of America is a federal constitutional republic comprising fifty states and a federal district...
. Several varieties are available. "Table Water" refers to water of a quality that is suitable for drinking at the table.

In 1801 Josiah Bent began a baking operation in Milton, Massachusetts
Milton, Massachusetts
Milton is a town in Norfolk County, Massachusetts, United States and part of the Greater Boston area. The population was 27,003 at the 2010 census. Milton is the birthplace of former U.S. President George H. W. Bush and architect Buckminster Fuller. Milton also has the highest percentage of...
, selling "water crackers" or biscuits made of flour and water that would not deteriorate during long sea voyages from the port of Boston. A crackling sound occurred during baking, hence the name. This is where the American term "cracker" originated. His company later sold the original hardtack
Hardtack
Hardtack is a simple type of cracker or biscuit, made from flour, water, and sometimes salt. Inexpensive and long-lasting, it was and is used for sustenance in the absence of perishable foods, commonly during long sea voyages and military campaigns. The name derives from the British sailor slang...
crackers used by troops during the American Civil War
American Civil War
The American Civil War was a civil war fought in the United States of America. In response to the election of Abraham Lincoln as President of the United States, 11 southern slave states declared their secession from the United States and formed the Confederate States of America ; the other 25...
. These were commercial versions/refinements of the hardtack biscuits which had long been used by the British Royal Navy
Royal Navy
The Royal Navy is the naval warfare service branch of the British Armed Forces. Founded in the 16th century, it is the oldest service branch and is known as the Senior Service...
and other European navies.

Several versions of water crackers exist in ex-British colonie
British Empire
The British Empire comprised the dominions, colonies, protectorates, mandates and other territories ruled or administered by the United Kingdom. It originated with the overseas colonies and trading posts established by England in the late 16th and early 17th centuries. At its height, it was the...
s, such as Jamaica
Jamaica
Jamaica is an island nation of the Greater Antilles, in length, up to in width and 10,990 square kilometres in area. It is situated in the Caribbean Sea, about south of Cuba, and west of Hispaniola, the island harbouring the nation-states Haiti and the Dominican Republic...
, where Excelsior brand water crackers are a popular breakfast/snack staple. They are often served with a spread, including a spicy pepper-and-herring paste called Solomon Gundy
Solomon Gundy
Solomon Gundy is a pickled fish pâté usually served with crackers as an appetizer in Jamaican cuisine. It is made with smoked red herring and is minced and spiced with hot peppers and seasonings. The dish appears on the menus of Jamaican restaurants and resorts...
.

Water crackers are similar in composition and texture to Matzo
Matzo
Matzo or matzah is an unleavened bread traditionally eaten by Jews during the week-long Passover holiday, when eating chametz—bread and other food which is made with leavened grain—is forbidden according to Jewish law. Currently, the most ubiquitous type of Matzo is the traditional Ashkenazic...
, a Jewish ritual bread.
The source of this article is wikipedia, the free encyclopedia.  The text of this article is licensed under the GFDL.