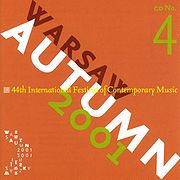 Warsaw Autumn is the largest international Polish
Poland
Poland , officially the Republic of Poland , is a country in Central Europe bordered by Germany to the west; the Czech Republic and Slovakia to the south; Ukraine, Belarus and Lithuania to the east; and the Baltic Sea and Kaliningrad Oblast, a Russian exclave, to the north...
festival
Music festival
A music festival is a festival oriented towards music that is sometimes presented with a theme such as musical genre, nationality or locality of musicians, or holiday. They are commonly held outdoors, and are often inclusive of other attractions such as food and merchandise vending machines,...
of contemporary music. Indeed, for many years, it was the only festival of its type in Central and Eastern Europe
Europe
Europe is, by convention, one of the world's seven continents. Comprising the westernmost peninsula of Eurasia, Europe is generally 'divided' from Asia to its east by the watershed divides of the Ural and Caucasus Mountains, the Ural River, the Caspian and Black Seas, and the waterways connecting...
. It was founded in 1956 by two composers, Tadeusz Baird
Tadeusz Baird
Tadeusz Baird was a Polish composer.He was born in Grodzisk Mazowiecki, to Scottish immigrant parents. He studied composition, piano and musicology in Warsaw with, among others, Kazimierz Sikorski. In 1956, with Serocki, he founded the Warsaw Autumn international contemporary music festival...
and Kazimierz Serocki
Kazimierz Serocki
Kazimierz Serocki was a Polish composer and one of the founders of the Warsaw Autumn contemporary music festival.-Life:...
, and officially established by the Head Board of the Polish Composers' Union. It is an annual event, normally taking place in the second half of September and lasts for 8 days. The first festival took place in 10–20 October 1956. In 1957 and 1982 there was no festival.

The first years of the festival, reaching back to the late 80's, was a period of particular magnificence. From the beginning of its existence the festival's program foundations were clear. The festival's leading aim was (and is) to present new music from Poland and around the world.