Encyclopedia
The Saint Petersburg – Warsaw Railway, Russian "Санкт-Петербурго-Варшавская железная дорога" (transcription: Sankt-Peterburgo–Varshavskaya zheleznaya doroga) is a 1333 km (828.3 mi) long railway, built in the 19th century by the Russian Empire
Russian Empire
The Russian Empire was a state that existed from 1721 until the Russian Revolution of 1917. It was the successor to the Tsardom of Russia and the predecessor of the Soviet Union...
to connect Russia with Central Europe. At the time the entire railway was within Russia, as Warsaw was under a Russian partition of Poland
Russian partition
The Russian partition was the former territories of the Polish-Lithuanian Commonwealth that were acquired by the Russian Empire in the late-18th-century Partitions of Poland.-Terminology:...
. Due to territorial changes, the line now lies within five countries and crosses the eastern border of the European Union
European Union
The European Union is an economic and political union of 27 independent member states which are located primarily in Europe. The EU traces its origins from the European Coal and Steel Community and the European Economic Community , formed by six countries in 1958...
three times. Therefore no passenger trains follow the entire route. Travel by passenger train between Saint Petersburg and Warsaw today (2010) passes Brest
Brest, Belarus
Brest , formerly also Brest-on-the-Bug and Brest-Litovsk , is a city in Belarus at the border with Poland opposite the city of Terespol, where the Bug River and Mukhavets rivers meet...
instead.

In February 1851 the Tsarist Government of Russia made a decision to build the St. Petersburg – Warsaw railway line with a length of approximately 1,250 kilometres. It was built to Russian gauge
Russian gauge
In railway terminology, Russian gauge refers to railway track with a gauge between 1,520 mm and . In a narrow sense as defined by Russian Railways it refers to gauge....
. Construction was completed in 1862.

The first section of the railway was completed in 1853 between Saint Petersburg
Saint Petersburg
Saint Petersburg is a city and a federal subject of Russia located on the Neva River at the head of the Gulf of Finland on the Baltic Sea...
and Gatchina
Gatchina
Gatchina is a town and the administrative center of Gatchinsky District of Leningrad Oblast, Russia, located south of St. Petersburg by the road leading to Pskov...
, with daily scheduled train service started on October 31, 1853. On July 19, 1858, the first train arrived in Pskov
Pskov
Pskov is an ancient city and the administrative center of Pskov Oblast, Russia, located in the northwest of Russia about east from the Estonian border, on the Velikaya River. Population: -Early history:...
.

The construction of the section from Lentvaris
Lentvaris
Lentvaris is a city in eastern Lithuania, 9 km east form Trakai, an important center of transportation, because many roads and railroads cross here.Lake Lentvaris is located near the city.- History :...
to Warsaw
Warsaw
Warsaw is the capital and largest city of Poland. It is located on the Vistula River, roughly from the Baltic Sea and from the Carpathian Mountains. Its population in 2010 was estimated at 1,716,855 residents with a greater metropolitan area of 2,631,902 residents, making Warsaw the 10th most...
was completed on December 15, 1862.

The first locomotives for the St. Petersburg – Warsaw railway were bought in England, France, and Belgium. They consisted of two cylinders. Their series was “G” and type – 0-3-0. They were produced in Manchester in 1857, in Paris in 1860, and in Belgium in 1862. The weight of such a locomotive was 30–32 tons.

The portion between Vilnius and Warsaw was rebuilt in the standard gauge
Standard gauge
The standard gauge is a widely-used track gauge . Approximately 60% of the world's existing railway lines are built to this gauge...
in the 1920s when that area belonged to Poland. The railway was partly destroyed during both world wars. 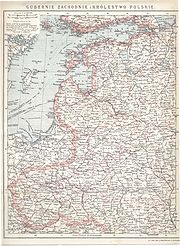