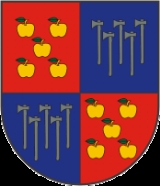 Encyclopedia
Kybartai is a city in the Marijampolė County
Marijampole County
Marijampolė County is one of the ten counties in Lithuania. It is in the south of the country in the historical Suvalkija region, and its capital is the town Marijampolė...
, Lithuania
Lithuania
Lithuania , officially the Republic of Lithuania is a country in Northern Europe, the biggest of the three Baltic states. It is situated along the southeastern shore of the Baltic Sea, whereby to the west lie Sweden and Denmark...
. It is located 20 km (12.4 mi) west of Vilkaviškis
Vilkaviškis
Vilkaviškis Until 1940 the city had a large Jewish Community which was annihilated by the Nazis and their local collaborators. The whole Jewish population was killed in a single day,, after the entry of the Germans into the city.-Names:...
and is on the border of Kaliningrad Oblast
Kaliningrad Oblast
Kaliningrad Oblast is a federal subject of Russia situated on the Baltic coast. It has a population of The oblast forms the westernmost part of the Russian Federation, but it has no land connection to the rest of Russia. Since its creation it has been an exclave of the Russian SFSR and then the...
, Russia
Russia
Russia or , officially known as both Russia and the Russian Federation , is a country in northern Eurasia. It is a federal semi-presidential republic, comprising 83 federal subjects...
.
It is the birthplace of famous classical Russian landscape painter Isaac Ilyich Levitan (Russian language
Russian language
Russian is a Slavic language used primarily in Russia, Belarus, Uzbekistan, Kazakhstan, Tajikistan and Kyrgyzstan. It is an unofficial but widely spoken language in Ukraine, Moldova, Latvia, Turkmenistan and Estonia and, to a lesser extent, the other countries that were once constituent republics...
: Исаак Ильич Левитан, 1860–1900), Polish composer Emil Młynarski and Lithuanian singer Inga Valinskienė.

When in 1861 a branch of Saint Petersburg – Warsaw Railway was built from Vilnius
Vilnius
Vilnius is the capital of Lithuania, and its largest city, with a population of 560,190 as of 2010. It is the seat of the Vilnius city municipality and of the Vilnius district municipality. It is also the capital of Vilnius County...
to the Prussia
Prussia
Prussia was a German kingdom and historic state originating out of the Duchy of Prussia and the Margraviate of Brandenburg. For centuries, the House of Hohenzollern ruled Prussia, successfully expanding its size by way of an unusually well-organized and effective army. Prussia shaped the history...
n border, where it was linked to Prussian Eastern Railway, the Russian border station near the village of Kybartai was named after the neighbouring town of Verzhbolovo (Вержболово), Lithuanian Virbalis
Virbalis
Virbalis is a city in the Vilkaviškis district municipality, Lithuania. It is located west of Vilkaviškis.As German Wirballen, Polish Wierzbołów, or Russian Verzhbolovo , it is frequently mentioned in historical as well in modern literature...
, German Wirballen. Meanwhile Kybartai has become a town bigger than Virbalis and the now Lithuanian border station station is called Kybartai, too. The once German station of the Prussian Eastern Railway on the western side of the frontier was Eydtkuhnen, today it is the Russian border station and called Chernyshevskoye
Chernyshevskoye
Chernyshevskoye is a settlement in Nesterovsky District in the eastern part of Kaliningrad Oblast, Russia, on the border with Lithuania.Between Chernyshevskoye and Lithuanian Kybartai is an important 24-hour border crossing point on the A229 principal road and the railway route connecting...
(Чернышевское).
The source of this article is wikipedia, the free encyclopedia.  The text of this article is licensed under the GFDL.