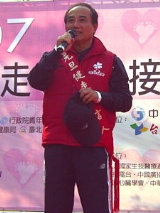 Wang graduated from Tainan First Senior High School
National Tainan First Senior High School
National Tainan First Senior High School is a public senior high school in Tainan City, Taiwan. The school was established in 1922. It is often considered one of the most prestigious high schools in Taiwan, usually only accepting students who rank in the top 3 percentile of the Taiwan Basic...
and later National Taiwan Normal University
National Taiwan Normal University
National Taiwan Normal University is an institution of higher learning operating on three campuses in Taipei, Taiwan . NTNU is widely recognized as one of Taiwan's elite institutions of higher education. The university enrolls approximately 11,000 students each year. The ratio of undergraduate to...
with a Bachelor of Science in mathematics
Mathematics
Mathematics is the study of quantity, space, structure, and change. Mathematicians seek out patterns and formulate new conjectures. Mathematicians resolve the truth or falsity of conjectures by mathematical proofs, which are arguments sufficient to convince other mathematicians of their validity...
in 1965. He worked as a math teacher for a year at the Provincial Chang-Hua Ging-Der High School. After his mandatory military service was completed, Wang returned home to work for the family-run food processing company. In early 1975, he became the founding director-in-chief of the Kaohsiung Industrial Association. His job involved travelling throughout the county to inspect member factories and led to his entry into politics later that year.

Wang became the KMT's first Director-General of the Committee on Coordination between Party and Government and the KMT Caucus Convenor in the Legislative Yuan in 1992 following the retirement of the original Legislative Yuan members in December 1991. He was Vice President of the 2nd and 3rd Legislative Yuans from 1993 to 1999.

He was elected president of the 4th Legislative Yuan on February 1, 1999. The KMT lost its majority for the first time in the 2001 legislative election
ROC legislative election, 2001
The Election for the 5th Legislative Yuan of the Republic of China on Taiwan was held on December 1, 2001. All 225 seats of the Legislative Yuan were up for election: 168 elected by popular vote, 41 elected on the basis of the proportion of nationwide votes received by participating political...
, but through the narrow Pan-Blue Coalition
Pan-Blue Coalition
The Pan-Blue Coalition 泛藍聯盟 or Pan-Blue Force is a political alliance in the Republic of China , consisting of the Kuomintang , the People First Party , and the New Party . The name comes from the party colours of the Kuomintang...
majority, he was reelected president for the 5th Legislative Yuan on February 1, 2002. He has been a KMT vice chairman since 2000 and a member of its Central Standing Committee since 1993. As Legislative Yuan President, Wang has gained a reputation of being a soft-spoken figure capable of reaching across party lines.

During the 2004 presidential election
ROC presidential election, 2004
The Election for the 11th-term President and Vice-President of the Republic of China , the third direct presidential election in Taiwan's history and the 11th presidential election overall under the 1947 Chinese Constitution, was held on March 20, 2004...
, he served as campaign manager for the Lien Chan
Lien Chan
Lien Chan is a politician in Taiwan. He was Premier of the Republic of China from 1993 to 1997, Vice President of the Republic of China from 1996 to 2000, and was the Chairman of the Kuomintang from 2000 to 2005...
and James Soong
James Soong
James Soong Chu-yu , is a politician in the Republic of China on Taiwan. He founded and chairs the People First Party, a smaller and more conservative party in the Kuomintang -led Pan-Blue Coalition....
ticket. Considered part of the pro-localization
Taiwanization
Taiwanization , also known as the Taiwanese localization movement, is a political term used in Taiwan to emphasize the importance of a separate Taiwanese culture rather than to regard Taiwan as solely an appendage of China...
faction in the KMT, his strong support and active campaigning for the Lien-Soong ticket was considered very significant as it blunted criticism that Lien-Soong were anti-Taiwan. There were calls, which he ignored, from many figures such as Lee Teng-hui
Lee Teng-hui
Lee Teng-hui is a politician of the Republic of China . He was the 7th, 8th, and 9th-term President of the Republic of China and Chairman of the Kuomintang from 1988 to 2000. He presided over major advancements in democratic reforms including his own re-election which marked the first direct...
for him to abandon Lien and join the Taiwan Solidarity Union
Taiwan Solidarity Union
The Taiwan Solidarity Union is a political party in the Republic of China which advocates Taiwan independence. It was officially founded on July 24, 2001 and is considered part of the Pan-Green Coalition. Unlike the Democratic Progressive Party, its larger companion party in the Pan-Green...
before the election.

Prior to July 2005, he was, along with Ma Ying-jeou
Ma Ying-jeou
Ma Ying-jeou is the 12th term and current President of the Republic of China , commonly known as Taiwan, and the Chairman of the Kuomintang Party, also known as the Chinese Nationalist Party. He formerly served as Justice Minister from 1993 to 1996, Mayor of Taipei from 1998 to 2006, and Chairman...
touted as possible presidential candidates for 2008
ROC presidential election, 2008
The election for the 12th-term President and Vice-President of the Republic of China was held in the Republic of China on Saturday, March 22, 2008. Kuomintang nominee Ma Ying-jeou won with 58% of the vote, ending eight years of Democratic Progressive Party rule...
. As a southerner, a native Hoklo speaker, and a legislator and person identified with the pro-localization faction of the Kuomintang, he was expected to provide balance to Ma Ying-jeou, who was rooted in northern Taiwan, and someone more identified with the unification-leaning parts of the party.

However, on July 16, 2005, Ma defeated Wang in the first competitive election for KMT chairmanship
KMT chairmanship election, 2005
The Chinese Kuomintang chairmanship election of 2005 was held on July 16, 2005 in the Republic of China between Ma Ying-jeou and Wang Jin-pyng. The election was triggered by the retirement of chairman Lien Chan....
by a 72% to 28% margin, a margin larger than anticipated by either camp or news sources, despite Wang's receiving a last-minute endorsement by People First Party (PFP) chairman James Soong
James Soong
James Soong Chu-yu , is a politician in the Republic of China on Taiwan. He founded and chairs the People First Party, a smaller and more conservative party in the Kuomintang -led Pan-Blue Coalition....
, who had retained significant following within the KMT. Immediately after the election, Ma stated repeatedly that he wished Wang to remain as first-ranked deputy chairman. Wang, however, has so far rebuffed the gesture, instead stating that he wishes to serve as "permanent volunteer," and snubbed Ma by refusing to meet with him. Wang has, indeed, accepted a party post that is incompatible with vice chairmanship, effectively ending the possibility that he would be vice chairman, although after meeting with Wang, Ma said that he would "leave the position open" for Wang.

In the APEC meeting at South Korea in late 2005, President Chen Shui-bian nominated Wang as the representative for Taiwan. The KMT approved of the nomination. This nomination did not become a reality, however, as the PRC pressured South Korea to ask for a second nomination. Despite lobbying by former South Korean president Kim Young-sam, who visited Chen in that time period, Chen was forced to name another person. This catfight actually exacerbated Taiwan's image, as the summit yearbook did not even mention Taiwan's presence. The host explanation was that the second nomination was submitted well past the deadline for the yearbook.

Most political commentators believe the KMT chairmanship election definitively put Ma Ying-jeou as the front-runner for the KMT nomination in 2008; this was proved correct as Ma won the KMT nomination for 2008 president on May 2, virtually uncontested. Although Wang did not join the primary election, Wang has also not ruled out running as an independent. Though Ma had offered Wang the nomination as the KMT's Vice Presidential candidate, Wang recently declined the offer, saying that the pressure of being legislative Speaker was too great for him to be able to consider the offer. After weeks of talks and discussions among the Pan-Blue heavy weights including Lien, Wang, Wu, and Ma, there was no agreement made to field a Ma-Wang President-Vice President ticket. At the end, Wang decided to turn down Ma's offer of Vice Presidency, but stated that he would do his utmost to support Ma in the upcoming election.
The source of this article is wikipedia, the free encyclopedia.  The text of this article is licensed under the GFDL.